Ikebana: The Japanese “Way of the Flower”

Imagine, for a moment, a Japanese style home. What materials spring to mind? What are the essential elements? Typically we would expect soft, muted tones; wood, bamboo, and paper finishings; with green tatami matting, sliding screens, and paper lamps casting a gentle meditative light. There in the corner of the main room is a focal point, an alcove, called a tokonoma, where our gaze is attracted by a piece of art. Perhaps a kakejiku, a hanging scroll, is hanging from the wall, and beneath it there is placed something that represents an idealized vision of the natural world. It might be an ancient bonsai tree, or perhaps within a beautiful ceramic vase there is a skillfull arrangement of flowers, leaves and branches. In his latest piece for the ZenVita blog, garden expert Mark Hovane takes a closer look at Ikebana, the Japanese art of flower arrangement, and celebrates its role in bringing nature, art, and harmony into the home. 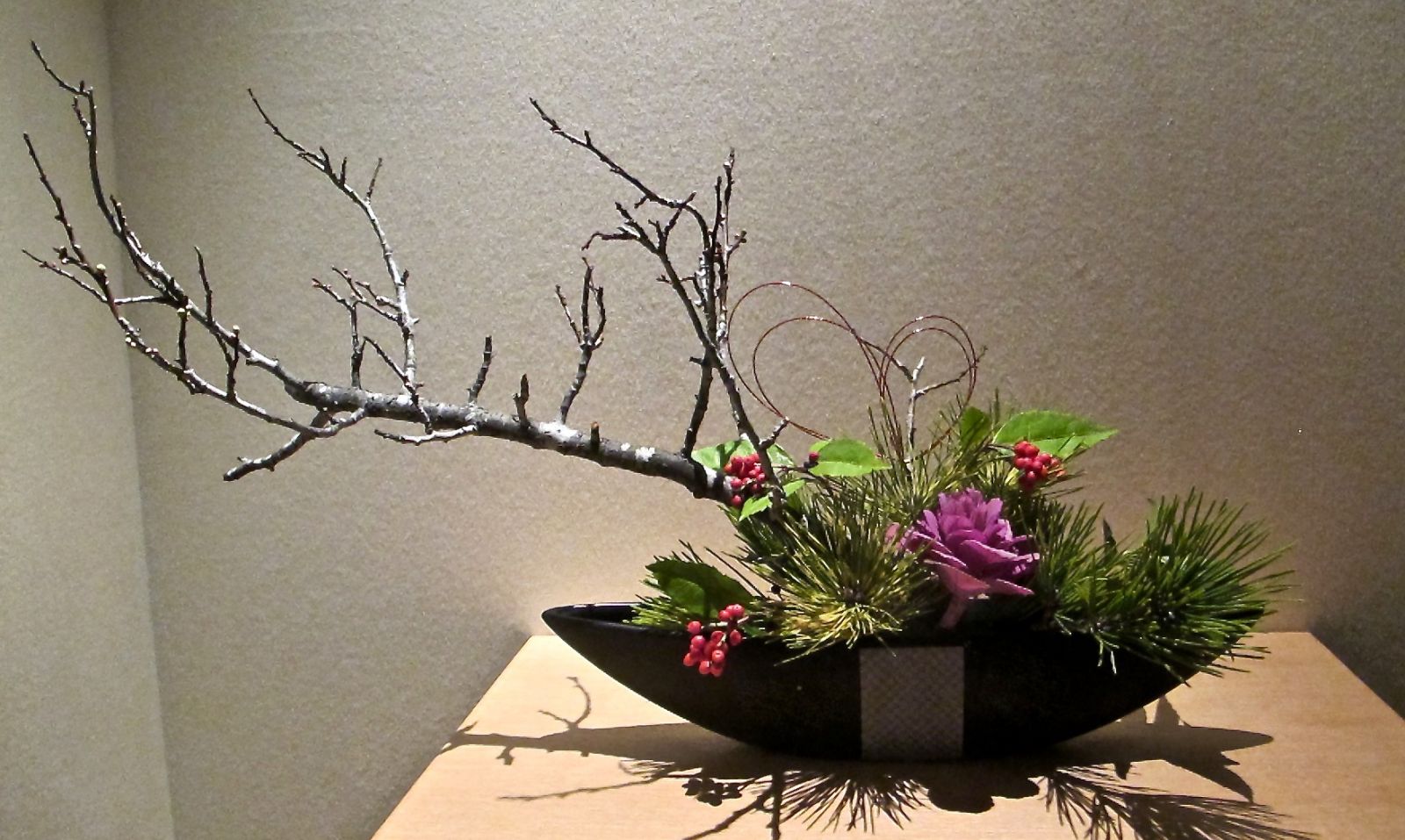 Ikebana is the traditional Japanese art of flower arrangement and is also known as “kado” or the “way of the flower”. The word Ikebana itself means “giving life to flowers”. More than simply putting flowers in a vase, Ikebana is a disciplined art form in which nature and human creativity are brought together. It has a recorded history, a coherent development and requires technical skills. It is backed by considerable theory and has remained a vital medium for creative expression until the present day. Just as the martial arts, calligraphy and tea ceremony have always been valued in Zen Buddhism as a means of self-cultivation, Ikebana or “kado” is seen as a means of training the mind and body. For the practitioner, immersion in the physical practice of the art can lead to psychological and spiritual emptiness (no-self), that is thought to be the source of skillful action and the basis for empathetic, ethical behavior. Self-transformation is the result of diligent practice. On a mundane level, Ikebana exemplifies the mindful enrichment of everyday life. 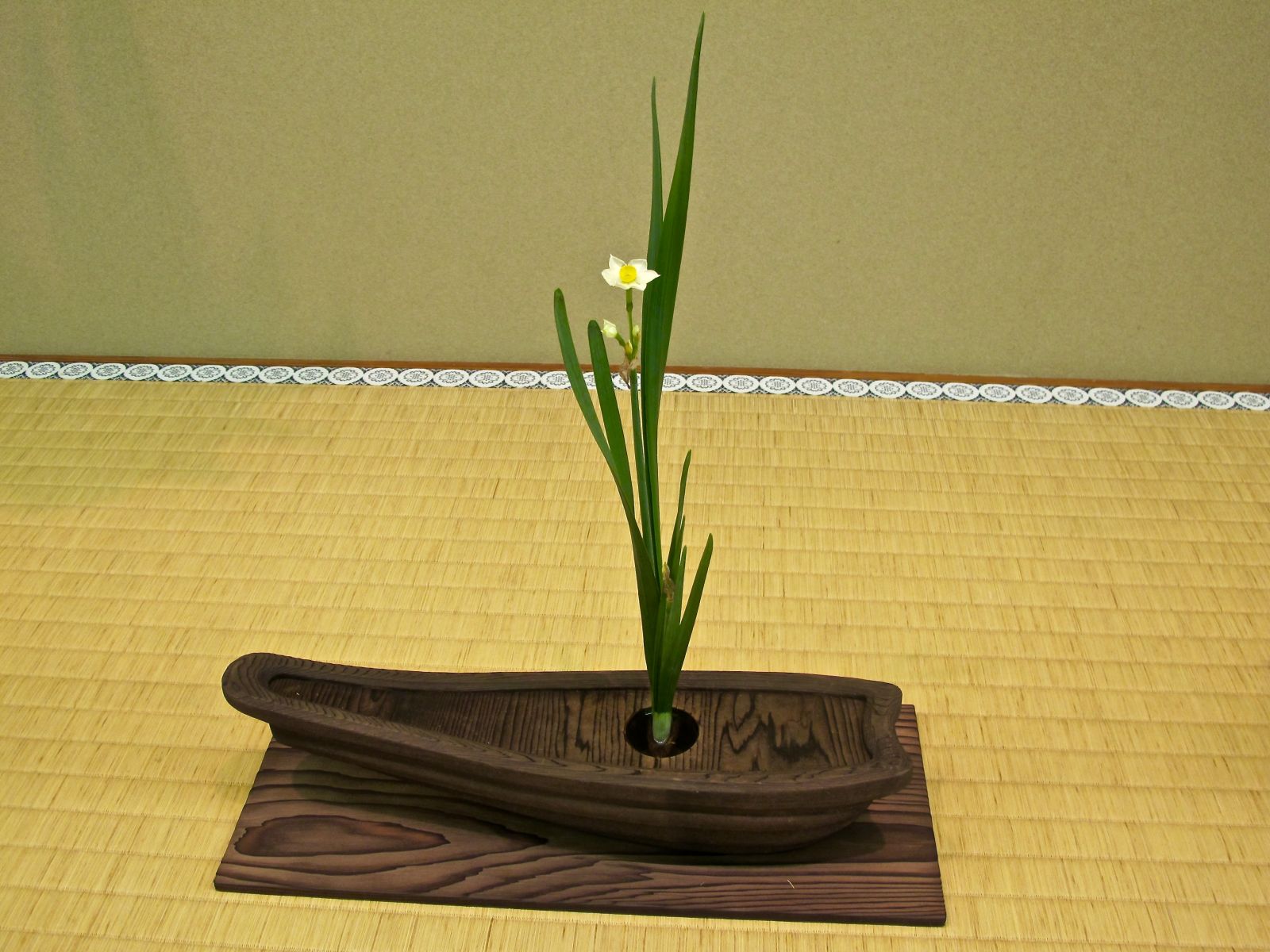 A brief introduction to Japanese aesthetics informs the important concepts that underlie Ikebana as an art form.

The qualities valued in Japanese art reach far beyond philosophical ideas of beauty; they form a cultural world view, centered around ideas of living in harmony with nature. Partially due to the large degree of seismic volatility on the Japanese islands, Japanese people are aware not only of the beauty that accompanies the passing of each distinct season, but also of the awesome power of nature. Natural disasters are a constant threat yet a sense of resigned acceptance is deeply ingrained in the mindset of the people. As life is fragile, there develops a heightened sense of the here and now. All of the traditional arts of Japan such as Haiku, Tea ceremony and Ikebana reflect this feeling, placing emphasis on the present moment. This reverence for the power of nature creates a submission to and grateful acceptance of natural objects with their individual characteristics. The reduced role of the humble artist allows objects to reveal their inner essences. For example, when the Ikebana practitioner arranges material, she listens to each flower, leaf and branch and lets them dictate their own placement. Also, for the traditional Japanese aesthetic, the elimination of excess is highly valued. In the West, masses of flowers (typically in full bloom), are held tightly in a vase with an abundance of foliage filling the gaps between. Whereas in Japan, emphasis is rather placed on accentuating the lines and individual shapes of each flower, leaf and branch. The surrounding empty space is just as important as the materials themselves. The Japanese have a word ma for the concept of interval or void in both time and space. Unlike the closest corollary in Western art language, intriguingly termed “negative space”, ma is full of energy and feeling. It speaks of pause as opposed to sound; of lack as opposed to excess. In the art of Ikebana, space is an essential component and often the “unsaid” focal point of an arrangement. Ma creates rhythm and flow, engaging the viewer with the composition.  Ma allows us to understand that “less is indeed more”. Additionally what distinguishes Ikebana from other forms of flower arrangement is the emphasis on asymmetry. Typically the total number of components is odd rather than even and this leads to an inherent dynamism. A sense of harmony between the materials, the container and the setting is also crucial. These are some of the compositional characteristics that Ikebana shares with other traditional Japanese visual culture including: paintings, architecture and of course gardens. 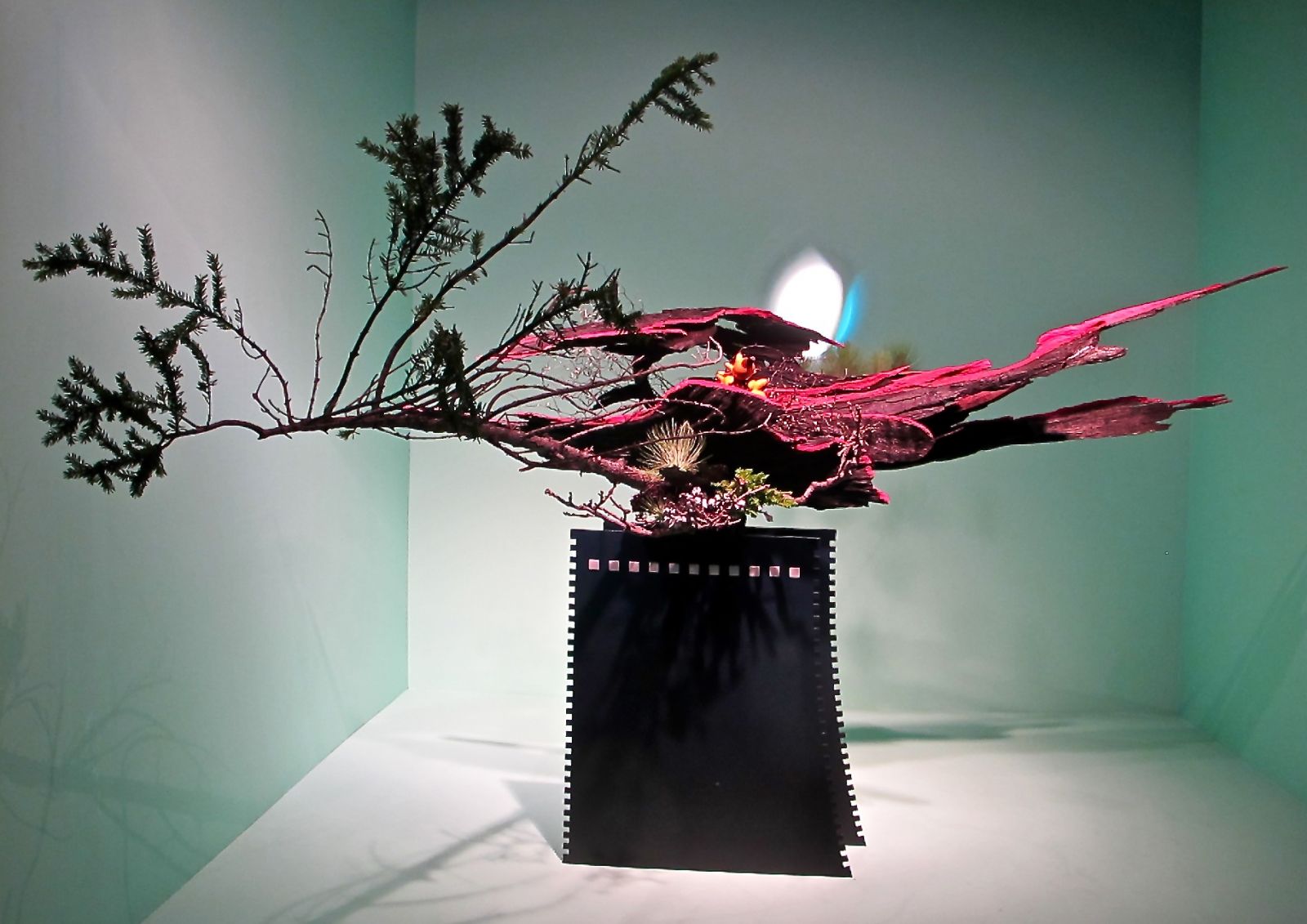 Unlike other art forms, Ikebana is comprised of natural living materials which are free to grow and change.

The fundamental basis of Ikebana’s beauty lies in its temporality. Day by day, as flowers and leaves mature, constant changes can be observed portraying the cycle of life. Ikebana encourages us to recognize the value of each stage, not only the given beauty of full bloom. Ikebana is believed to realign humanity with the laws of nature. The traditional structure of arrangements has three main branches or stems emerging from a central point and often forming the shape of a scalene triangle. Such a harmonious triad symbolizes the unity between the heavenly realm, humans and the earth. 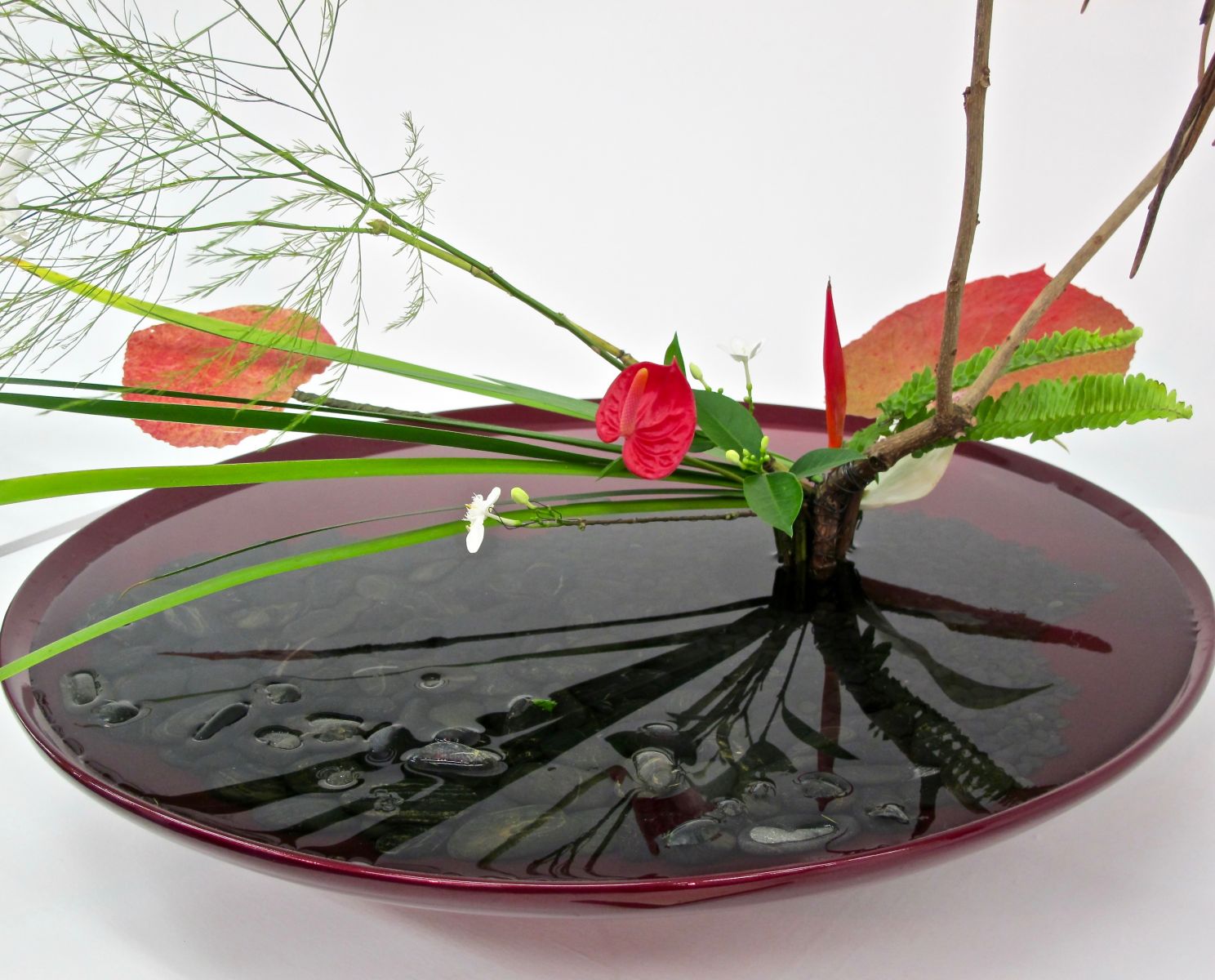 For the Ikebana practitioner, the paradox of respect for “living” materials, is that in cutting them, while striving so diligently to honor them, she has in fact disturbed the natural cycle and of course shortened their lives. Perhaps it was this very paradox that so attracted the French existentialist philosopher Jean-Paul Sartre to Ikebana. 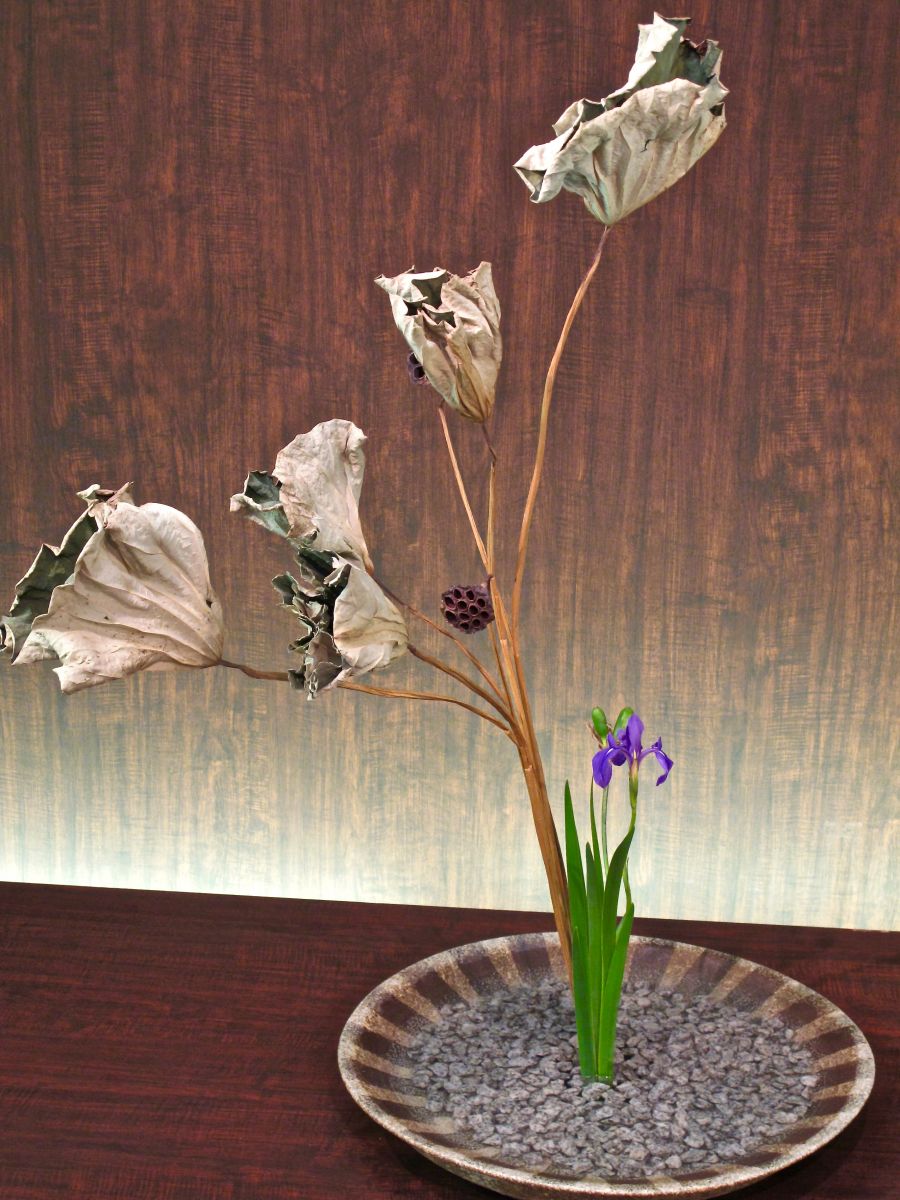 The aesthetic “framing” of Ikebana can also be contextualized by looking at Japanese history.

In ancient times, evergreen branches were erected to serve as temporary lodgings for Shinto deities or kami.

The custom of offering standing flowers was transmitted to Japan with Buddhism from China. Later with refinements that accompanied architectural and social innovations, flowers lost their purely religious connotations and became more familiar objects of appreciation. “Standing flower” rikka specialists emerged and arrangements became progressively formalized in the 16th century. A distinctly freer approach nageire to flower arrangement developed as well; the approach adopted by tea master Sen no Rikyu as an extension of the individualistic world of the wabi style of tea ceremony, practiced with simple utensils in a rustic environment. These free and formalized approaches were eventually integrated, creating a new form of Ikebana that hence forth became a popular cultural pursuit for everyone from samurai to merchants. Ikebana has also been modernized in the 20th century but retains fundamental principles. As Ikebana’s philosophical underpinning, what unites both Shinto and Buddhist worldviews is the notion that the natural world is always in a state of flux. The fact that petals fall, that beauty is fleeting, can be understood through the word “transience”. The Japanese find beauty in that truth. 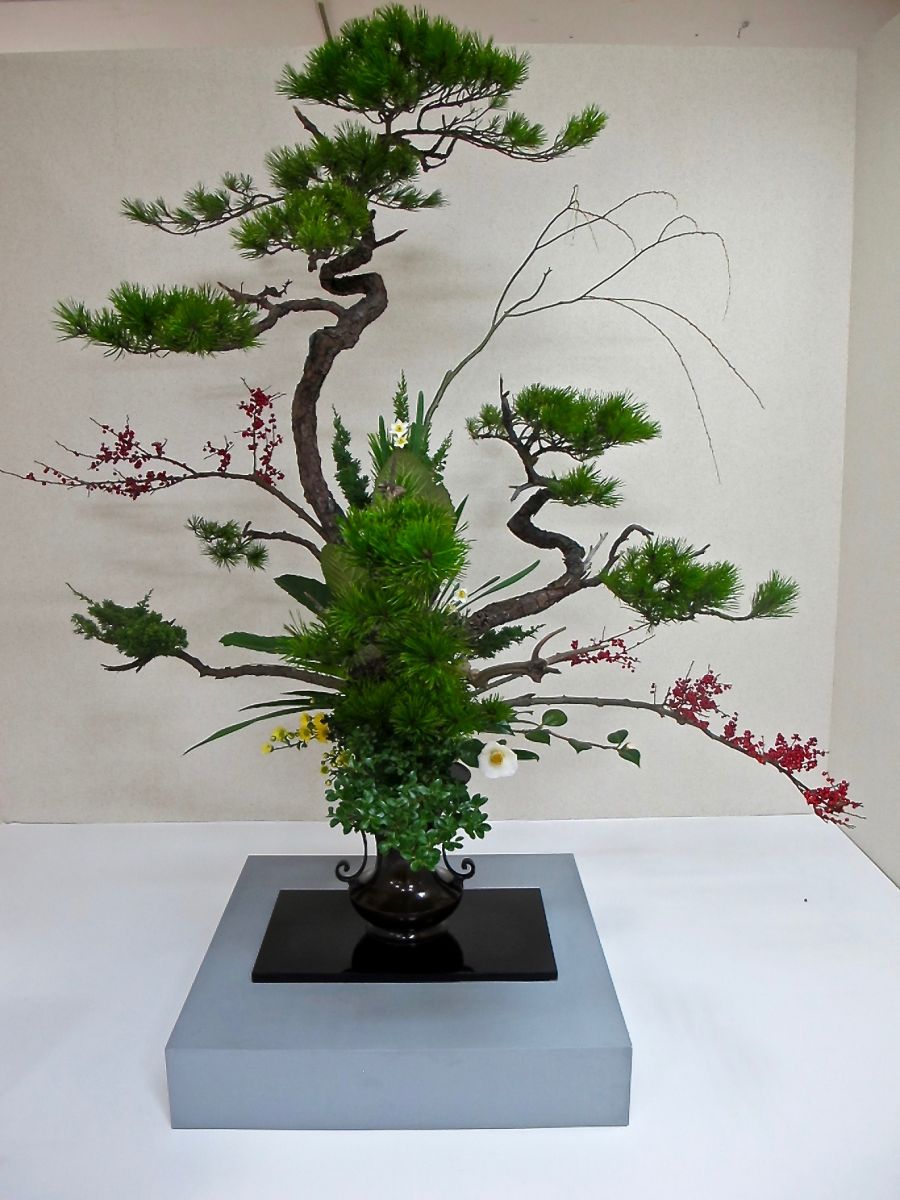 How do we live in a constantly changing world? Ikebana creates out of this very conundrum. Japanese traditional arts have always embraced transience. As places of constant transformation, Japanese gardens are also imbued with a large degree of ma. It is not surprising that Ikebana used to be required study for trainee garden designers. The esteemed 20th century garden master Shigemori Mirei (grandfather of ZenVita associate Chisao Shigemori) was also a renowned Ikebana artist. Today, ZenVita garden designer Chisao Shigemori is a master of the form of how to create “more with less”. For more details of his work please visit his ZenVita page at http://www.zenvita.com/professionals/chisao-shigemori. 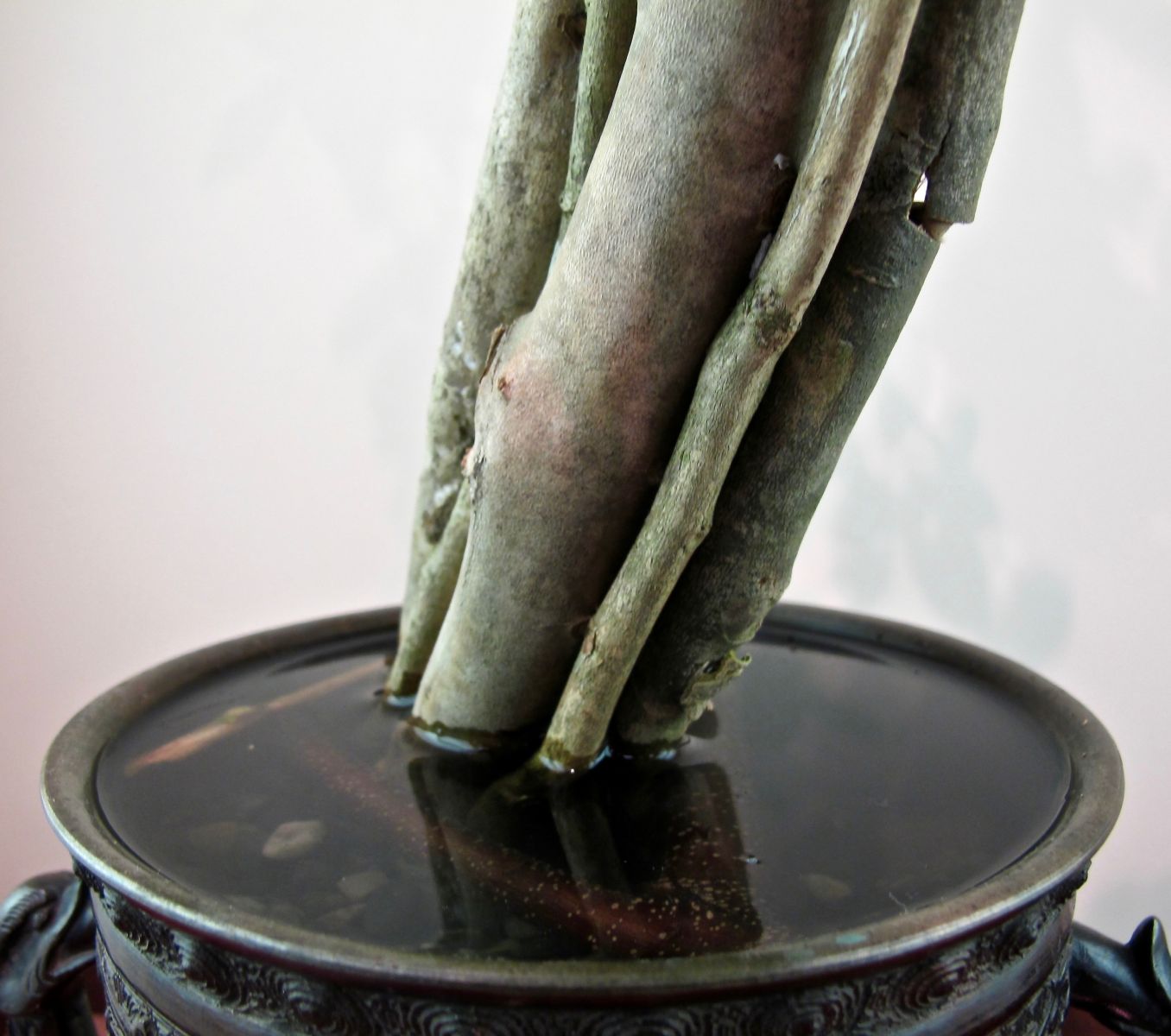 ZenVita works with the very best Japanese architects, designers, and landscape architects to help you incorporate the Japanese aesthetic into your home. For more home interior ideas, visit our projects and designers pages. For FREE advice and consultation on all your interior design or garden upgrade needs, contact us directly: Get in touch. 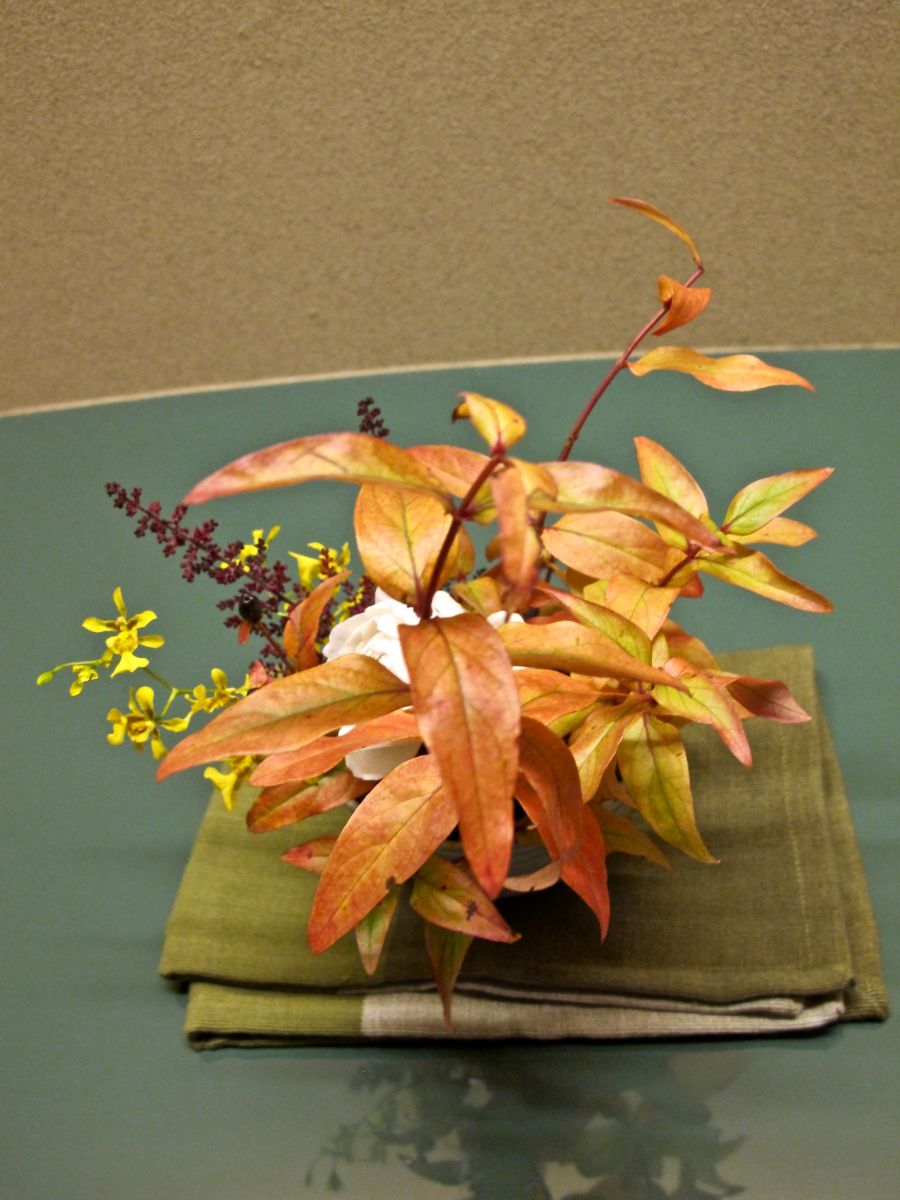 Original pictures and main text by Mark Hovane. Mark Hovane, from Australia, is a long term resident of Kyoto and is passionate and highly knowledgable about Japanese gardens. Previously Mark has written for ZenVita on the gardens of Shinnyo-do and Tenryuji. Mark provides intimate and insightful private garden experiences and introductory ikebana workshops in Kyoto. To learn more, visit his website: www.kyotogardenexperience.com.