Tenryu-ji: Temple of the Heavenly Dragon

The Temple of the Heavenly Dragon, Tenryu-ji, is a Rinzai Zen Buddhist temple nestled in the western mountains of the Arashiyama district in Kyoto. Constructed before the thirteenth century, the temple’s pond garden is one of the first in recorded Japanese history to use “borrowed scenery” (shakkei). “Borrowed scenery” incorporates distant landscape elements into the design in a way that visually enlarges the space. At Tenryu-ji this primarily takes the form of two mountains: Kameyama (Turtle Mountain) and Arashiyama (Storm Mountain), appropriated and integrated into the mix of vegetation, rocks and water. 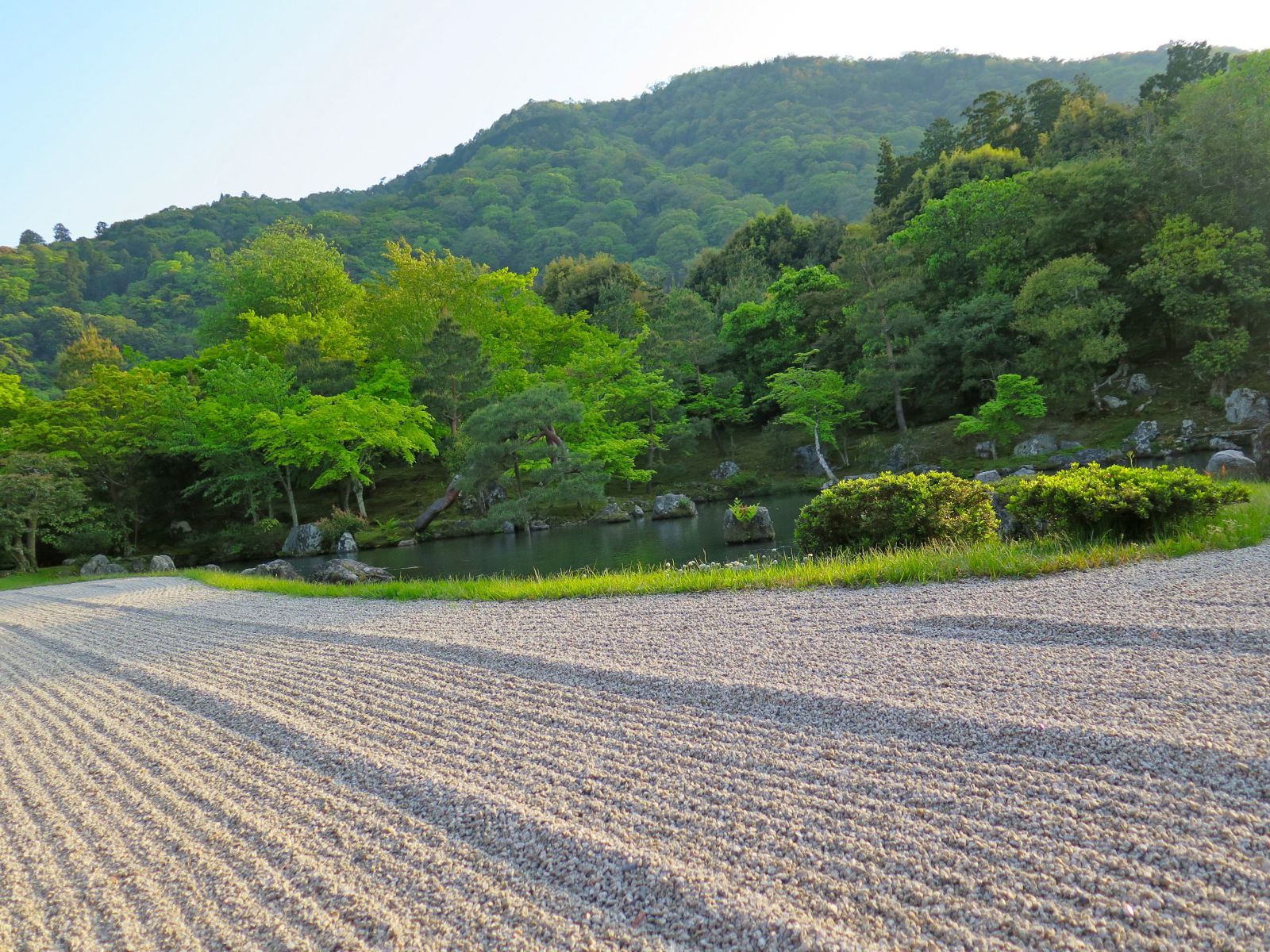 The borrowed scenery at Tenryu-ji. Photograph by Mark Hovane.

Historically important as connected to both the military government and the Emperor of the day, Tenryu-ji ranked as number one among Kyoto’s so called “Five Mountains of Zen” (Gozan). In 1994 it was registered as a UNESCO World Heritage site.

Originally designed as part of a Heian period aristocratic villa, the garden was used as a “strolling pond garden”, in which a level path surrounding the pond, afforded visitors a sequence of gradually unfolding vistas. Today, Tenryu-ji’s pond is most probably a reduced version of the Heian style lake garden but with the same open, sunny atmosphere that reflected the relatively carefree lifestyle of the aristocratic courtiers. The pond has a shoreline interrupted by large peninsulas. These serve to prevent the monotony of a circular outline. 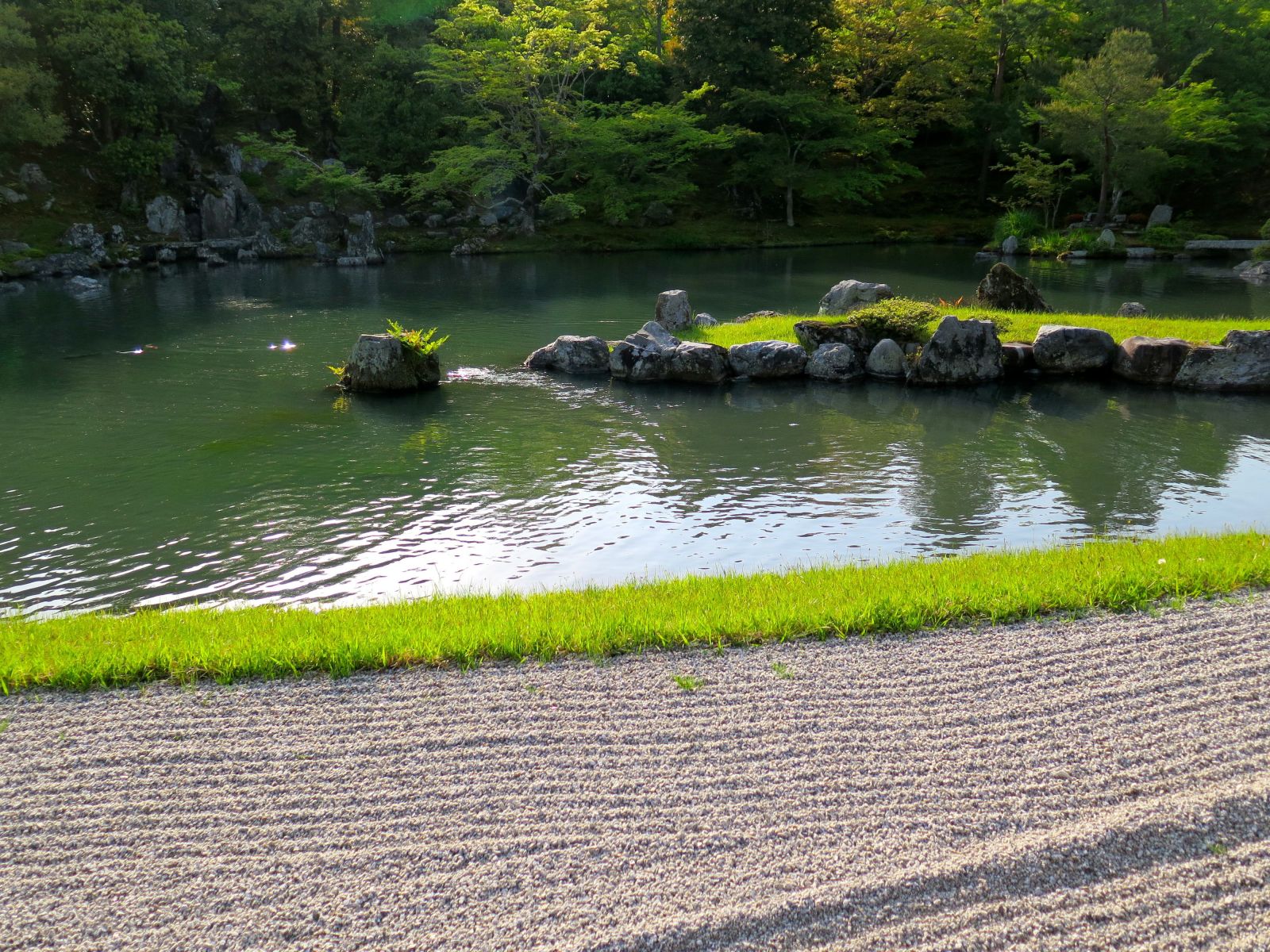 One of the most distinctive features of Tenryu-ji’s garden is the relationship between the main building (hojo) and the pond. From the fixed viewpoint of the building’s porch, the garden divides easily into three parts: a background, a middle ground and a foreground. The background is comprised of large trees and the once visible river and natural small mountains behind. The middle ground consists of the pond and its enclosing artificial hillocks. The foreground is a stretch of level raked sand between the building and the nearest edge of the pond. 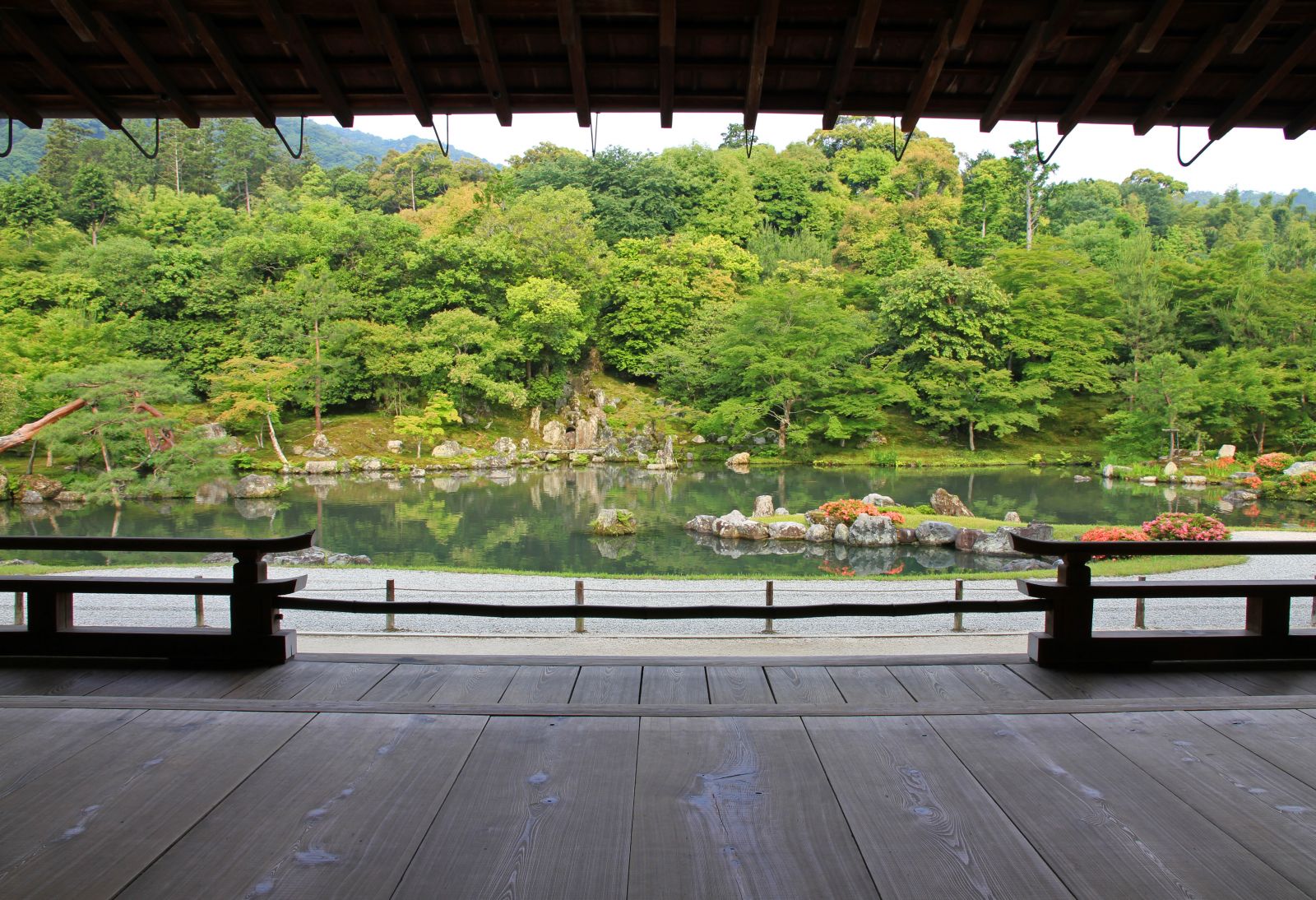 A view from the porch. Photograph courtesy of Sone Zoen.

Originally the use of the garden was “recreational” in the forms of strolling and boating. Later in the Muromachi period, the pond was above all meant to be viewed from within the building itself. Therefore, the raison d’etre of the garden changed from amusement to contemplation. In fact, from a seated position on the porch, it becomes obvious that the principal feature of the garden is a dynamic grouping of rocks set near the shore at the rear of the pond. There are two particular rock groups (considered some of the finest in Japan). The first of these at the rear is “Ryumon-no-taki” (Dragon-Gate-Waterfall), associated with the legend that says: “if a carp fish can climb the fall, it will turn into a dragon and enter heaven”. This belief began as an allegory of humanity’s spiritual struggle and to this day encapsulates the Zen adherence to self-discipline and effort as the primary mode of spiritual endeavor. In the physical setting of the garden, the “carp-stone” is set halfway up the waterfall composition and is dynamically poised on the brink of “transformation”. Above the “carp-stone” is a second “cascade” with a precipitous face. At the very top, the whole structure is crowned by a huge pointed rock peak. In every line, this rugged, powerful cascade suggests the dynamic movement of water. Yet, there is not a single drop in it! Although the rocks are positioned on an artificial hillock with no actual water source, the feeling of the water surging through is so strong, it seems water must have created it. 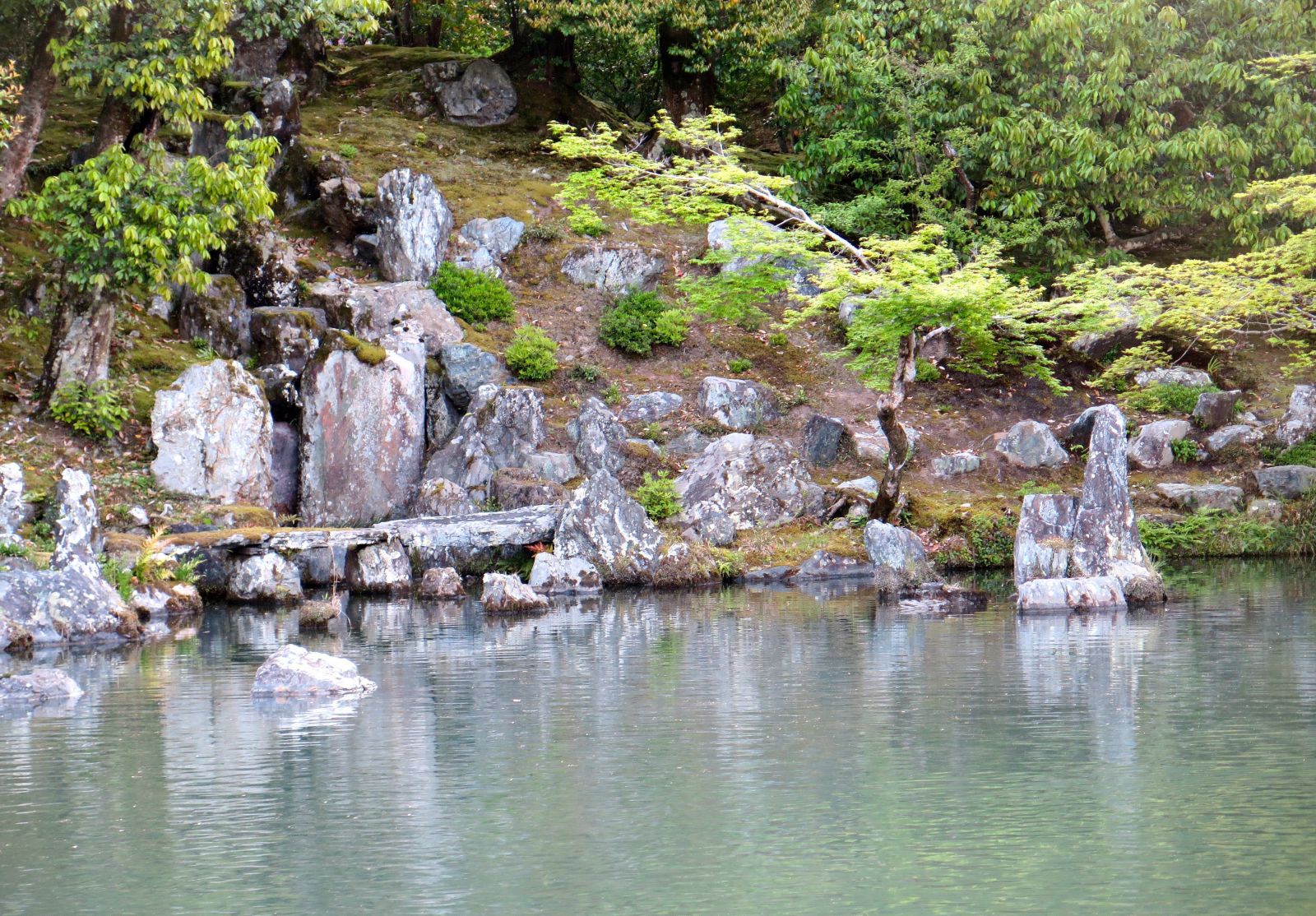 The waterfall and island. Photograph by Mark Hovane.

Another principal feature of the garden is an adjacent grouping of rocks positioned slightly in front of the waterfall composition. With an emphatic vertical thrust, rising above the surface of the pond, this “island” emerges to the right of a stone bridge and represents a “Paradise Island” (Horai from ancient Taoist thought). It is made of seven stones with the central peak, a tall pointed pinnacle leaning slightly. Placed firmly against it are two flat topped stones which provide support and strongly contrasting lines. Three lower stones of differing heights cluster about the base, opposite the leaning pinnacle. The strong vertical lines emanating from the water are in strong contrast to the more common horizontal style of Japanese stone art. 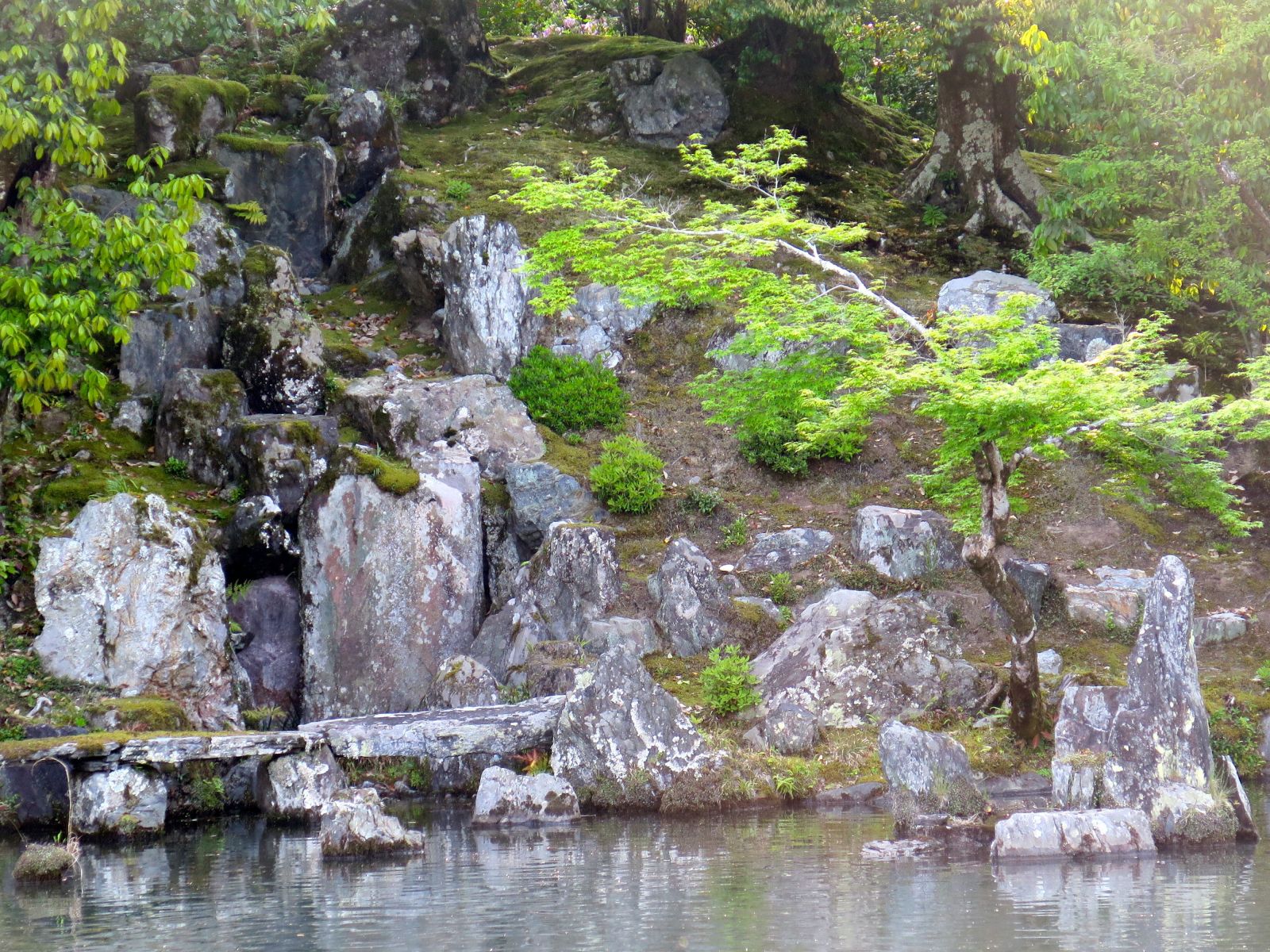 A close-up view of the waterfall and island. Photograph by Mark Hovane.

From the fixed viewpoint on the temple porch, as we look at the waterfall and island marked by their upward soaring thrust, we recognize these rocks, not simply as nature, but as art, bold and rugged, designed perhaps to excite the imagination, carrying us away from Japan’s gentle mountains, to the mythical scenery of vast Chinese landscape, its painting and traditions.

To more clearly understand how these “foreign” Sung dynasty inspired landscapes appeared in medieval Japan, we must also investigate the history of Tenryu-ji. In the Kamakura period (early 1340’s), the Shogun Ashikaga Takauji converted a palace built for retired Emperors into a Zen temple, to appease the spirit of the recently deceased Emperor Go-Daigo whom he had deposed.

Muso Soseki, the Zen Master who advised the Shogun to take this action became the first Abbot of Tenryu-ji. Many of the funds required to undertake the extensive renovations came from trade with China. The temple was opened in 1339 with the garden being remodeled at the same time. Not only revered for his wisdom, Muso was also considered a genius in designing gardens for Zen temples. In remaking the Tenryu-ji garden, he created a Heian style pond garden that incorporated Chinese aspects popular at that time. 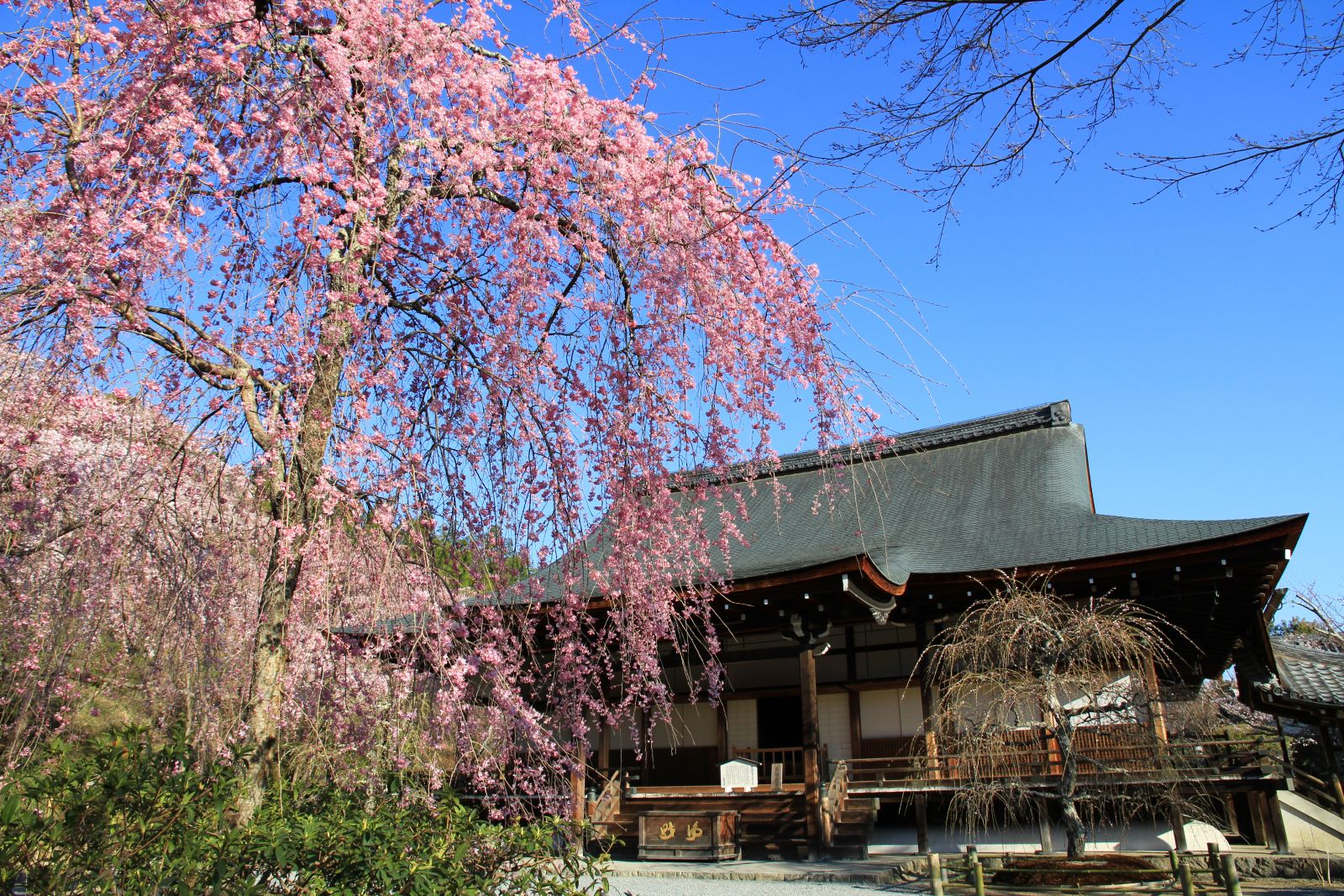 These days, Tenryu-ji’s gardens are carefully tended by ZenVita associate company Sone Zoen.  A visit to Tenryu-ji is designed to engender a felt experience of a venerated Buddhist place. For many visitors, the garden continues to impart feelings of renewal: emotionally, physically and spiritually.

To get to Tenryu-ji, take the JR Sagano line train from Kyoto Station (10-15 minutes) and get off at Saga-Arashiyama station.

Admission price is 500 yen for the garden only and an additional 300 yen to also view the buildings. 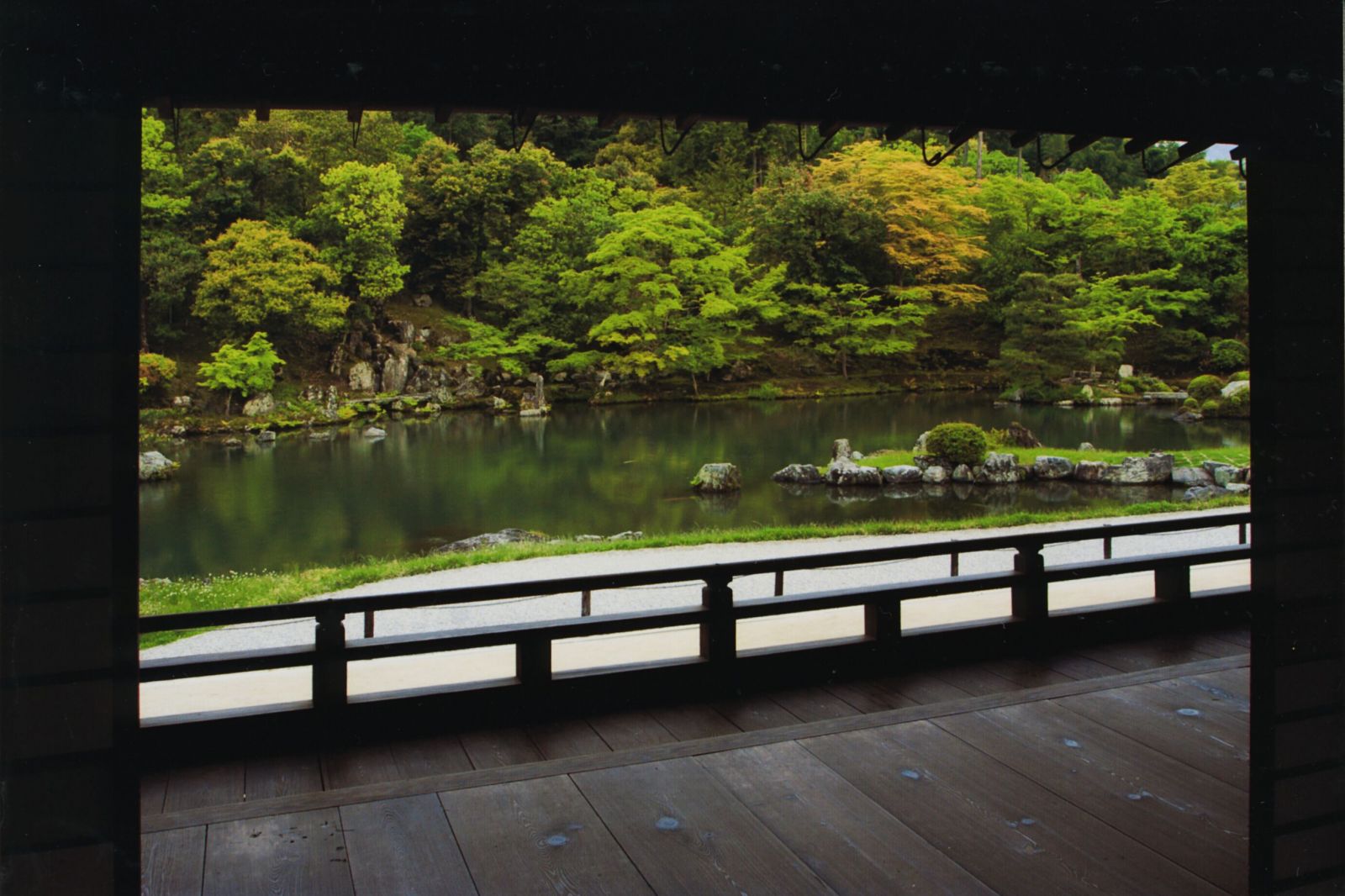 Another view from the porch. Photograph courtesy of Sone Zoen.

The landscape architecture company, Sone Zoen, are associates of ZenVita and are available to design your Japanese garden! You can view more of their gardens and read more about their work on the ZenVita Landscape Architects page. For FREE advice and consultation with Japan's top landscape designers, please get in touch.

Original pictures and text by Mark Hovane. Mark Hovane from Australia is a long term resident of Kyoto and is passionate and highly knowledgable about Japanese gardens. Mark provides intimate and insightful private garden experiences in Kyoto. To learn more, visit his website: www.kyotogardenexperience.com.