A Visit to Shinnyo-do Temple in Kyoto 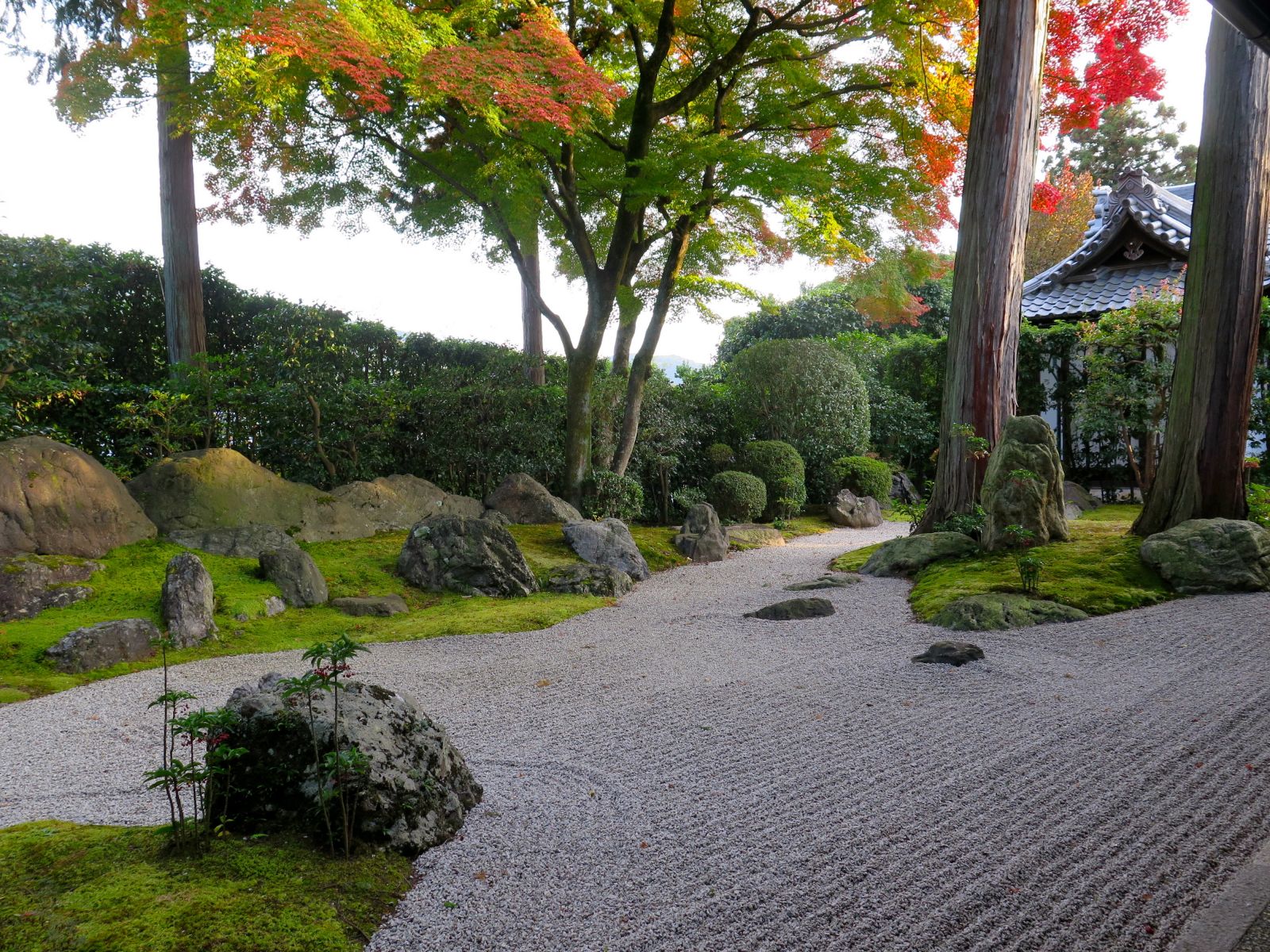 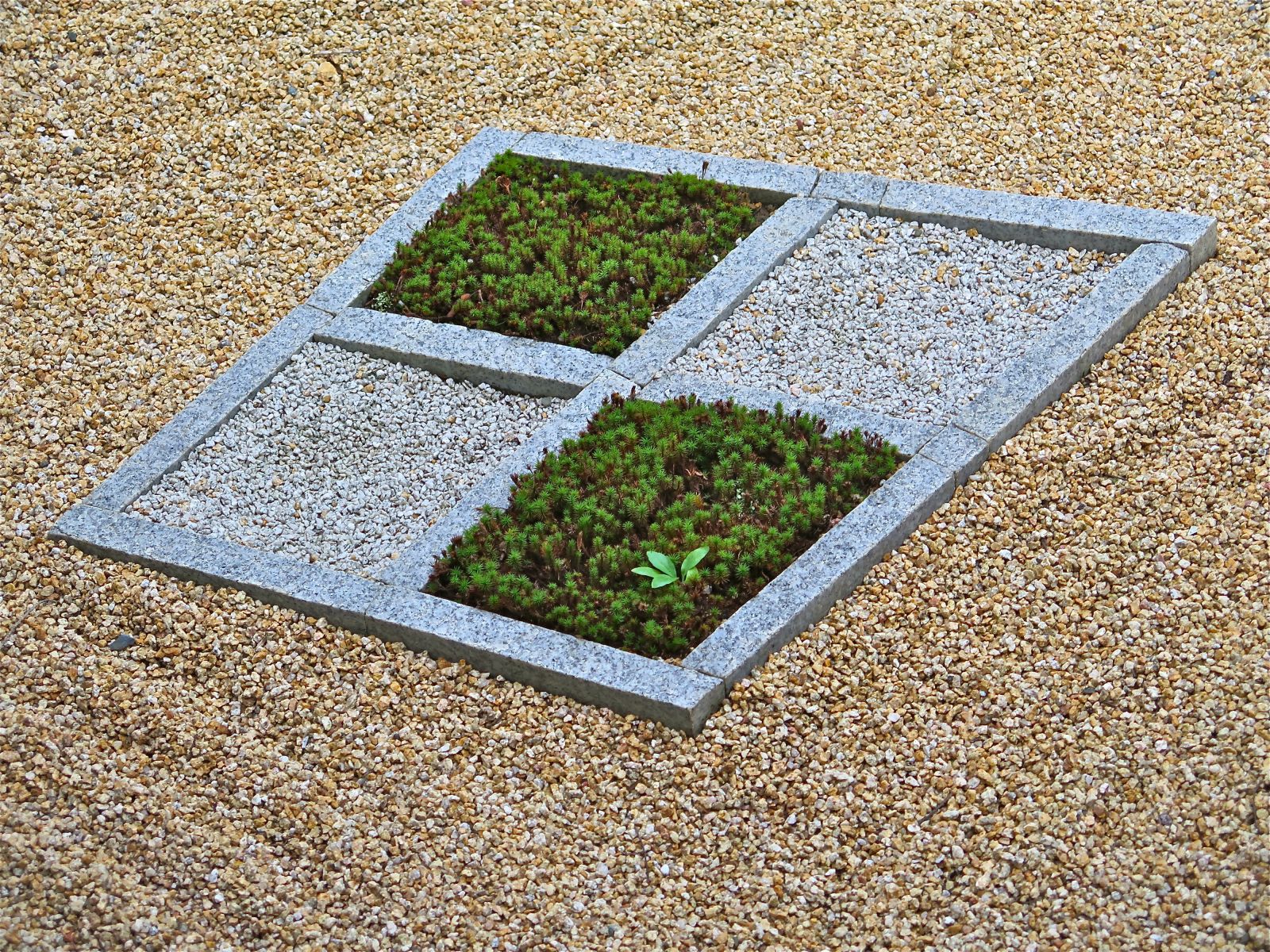 The smaller of the two gardens was designed by ZenVita associate, the contemporary landscape designer Chisao Shigemori, grandson of the iconoclastic 20th century master Shigemori Mirei, who designed the Tofukuji Hojo garden amongst others. “Zuien-no-niwa” known as the “Garden of Connection”, completed in 2010, is a modern Japanese style stone garden. The design is based on the family crest of major temple benefactor, the Japanese industrial titan, the Mitsui family. Strongly geometric in composition, the diamond shaped “shishigata” pattern echoes the major elements of the Mitsui’s symbol. Not only the trees but also all the stones used in the garden, are completely recycled from materials that previously existed at the temple. The garden can be described as a kind of “tsuboniwa” or courtyard style, that relies for impact on a preponderance of straight lines, granite borders and variously coloured gravels. In typically “Zen” fashion, the name of the garden reflects the designer’s intention that the composition should be “open” enough, to be able to mirror each viewer’s “creation of meaning”. 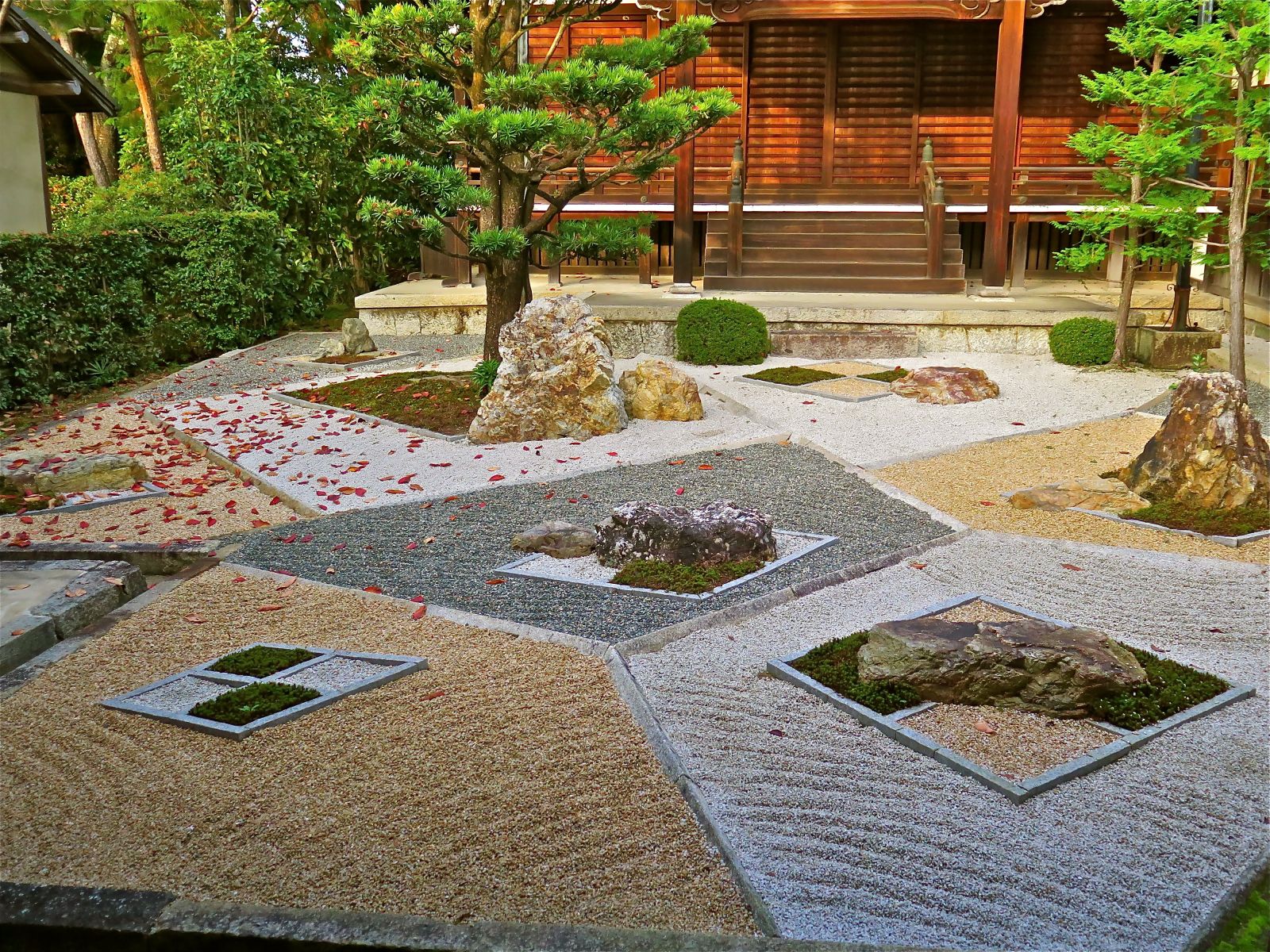 The second garden “Nehan-no-niwa” (Nirvana Garden), adjacent to the “Shoin” (main study) was designed by ZenVita associate company Sone Zoen in 1988. Also a contemporary “karesansui” (dry landscape), it is based on one of Shinnyo-do’s great treasures “Nehan-zu” (Painting of Great Nirvana). The four largest, horizontally displaced stones in the centre of the garden, represent the recumbent Buddha as he lay dying. Smaller stones represent the assortment of attendant animals, the Buddha’s mother and even the Ganges River. Various species of trees are used to represent symbolically Buddhist “Sal” trees. This eastern garden cleverly incorporates the scenery of nearby Mt. Daimonji as well as some other smaller mountains that are part of the “Higashiyama-Sanju-Roppo” (36 Eastern Mountains). This sophisticated garden technique known as “shakkei” (borrowed scenery), visually extends the limited parameters of the space by incorporating a distant view. A mixed hedge placed in the background of the garden acts as a bridging device, dividing the garden and the “shakkei” object of the nearby mountain range. For the visitor, sitting next to the garden is a particularly relaxing experience because of the skilful placement of stones, gravel and plants. Although this garden features a generous number of stones, it never feels too busy. Using a generous amount of raked gravel provides a strong element of “ma” (empty void space), serving as a base for “yohaku-no-bi” (beauty of paucity). 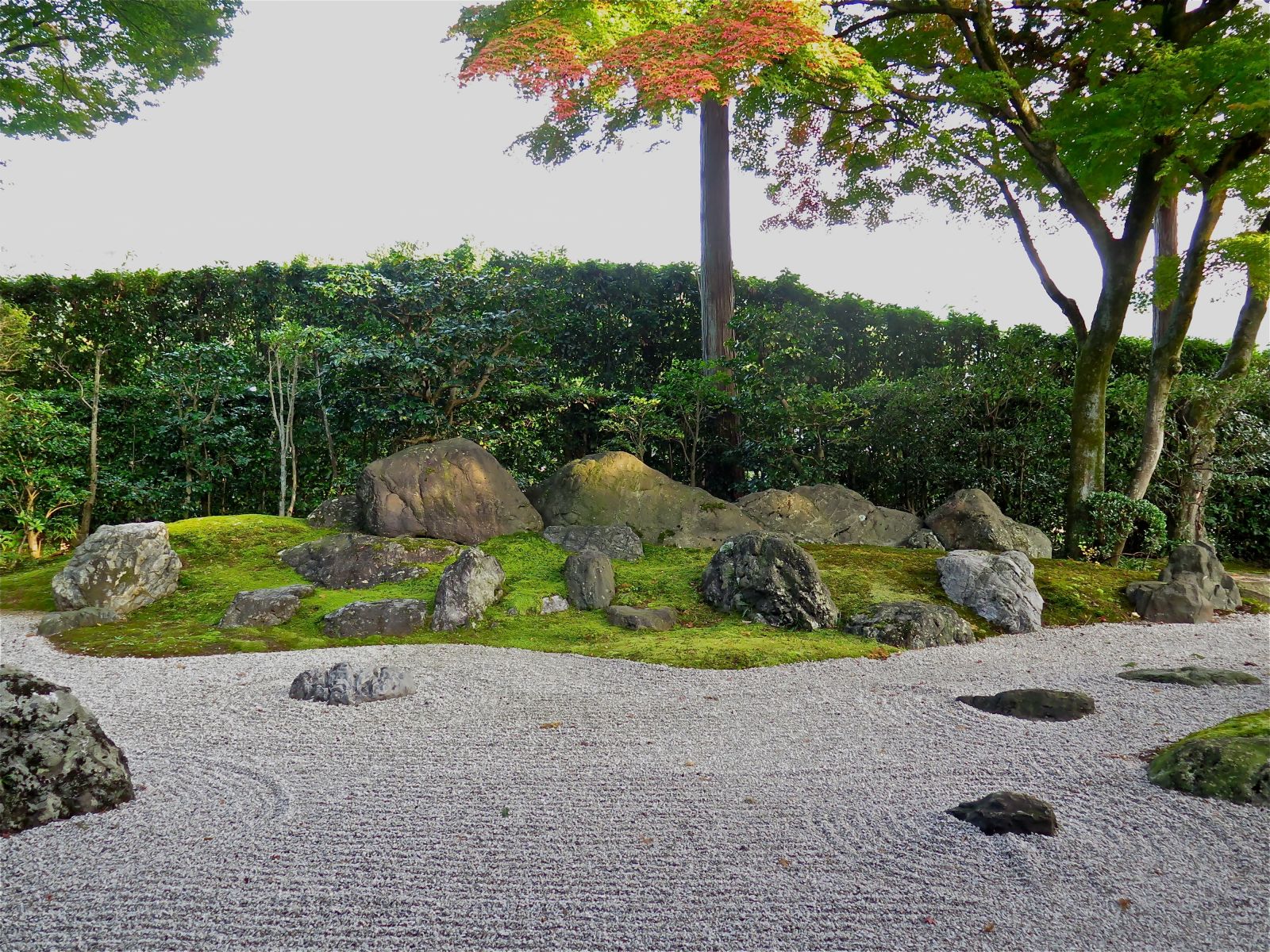 A view of the recumbent Buddha in Zuien-no-niwa

Most of the temple’s expansive grounds are free to explore, but a fee is required to enter the inner chamber of the main hall and to see the temple gardens. Visitors to the main hall’s ornately decorated inner chamber will notice a large gold-leaf covered canopy as well as more lavish embellishment of ritual Buddhist paraphernalia. Statues of Monju Bodhisattva and Saicho (the founder of Tendai Buddhism in Japan) are also displayed. Two huge paintings are alternately on show every six months: one depicts the death of the historical Buddha and is the inspiration for the larger “karesansui” garden, while the other is a mandala that illustrates the Pure Land of Pure Land Buddhism. Connected to the main hall by a corridor are extra rooms that feature elegant sliding doors “fusuma”.

The main statue of this temple is Amida Nyorai which was originally enshrined more than 1000 years ago, in the main Tendai sect headquarters Enryaku-ji on nearby Mt. Hiei in 984AD. Shinnyo-do was relocated a few times by both the Ashikaga Shogunate and supreme warlord Toyotomi Hideyoshi, in the civil war period of the fifteenth century, until it reached its present location in 1693.

Ever since that time, Shinnyo-do has been popular among the faithful “nenbutsu-gyoja” (ascetic monks chanting Buddhist invocations) as a training hall. The principal image of the temple, the standing figure of Amida Nyorai, was originally carved to become the main image of the ascetic monks of Enryaku-ji. However, as the apocryphal story goes, when the sculptor Ennin requested this, the Nyorai shook his head in disapproval and so Ennin modified his request to ask that the Nyorai go down to the capital Kyoto, to save the common people especially women. The guardian statue standing by the Amida Nyorai is Fudo Myou, which is believed to have saved an important court officer in the Heian period (794-1185). 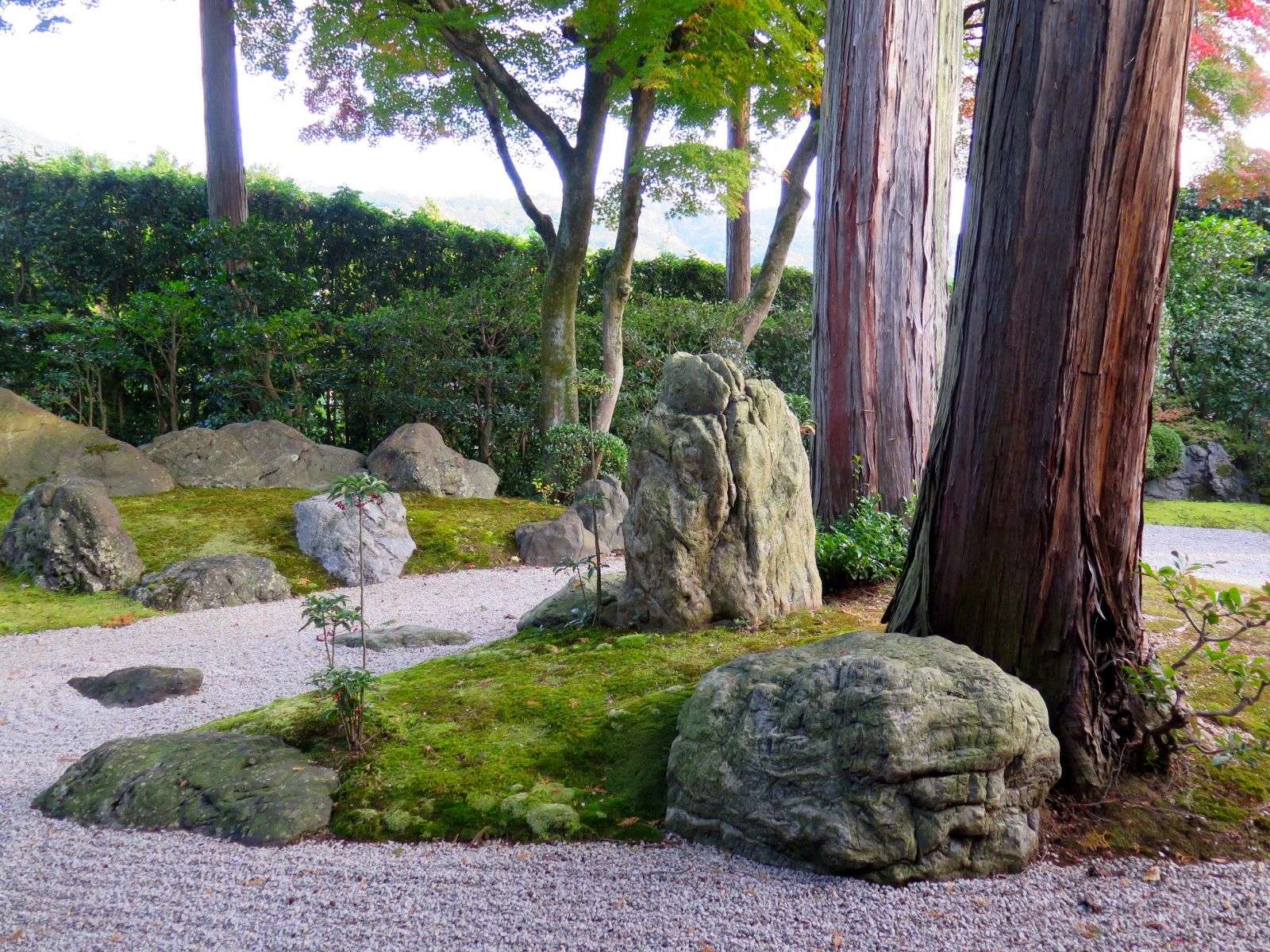 Although this garden features a generous number of stones, it never feels too busy...

A visit to Shinnyo-do is a wonderful opportunity not only to touch some very old Japanese history, but also to appreciate the creative work of two very different and influential Japanese landscape designers. Strongly recommended in any season, it is particularly atmospheric in late autumn.

To get to Shinnyo-do Temple, it takes approximately thirty minutes by Kyoto City Bus #5 from Kyoto station to the stop “Shinnyo-do-mae”, then five minutes on foot in a westerly direction to “Higashi-sando” (the eastern approach) of the temple. Hours are from 9:00AM to 4:00PM. Entrance to the grounds is free and to enter the main hall and gardens, the admission fee is 500 yen for adults. 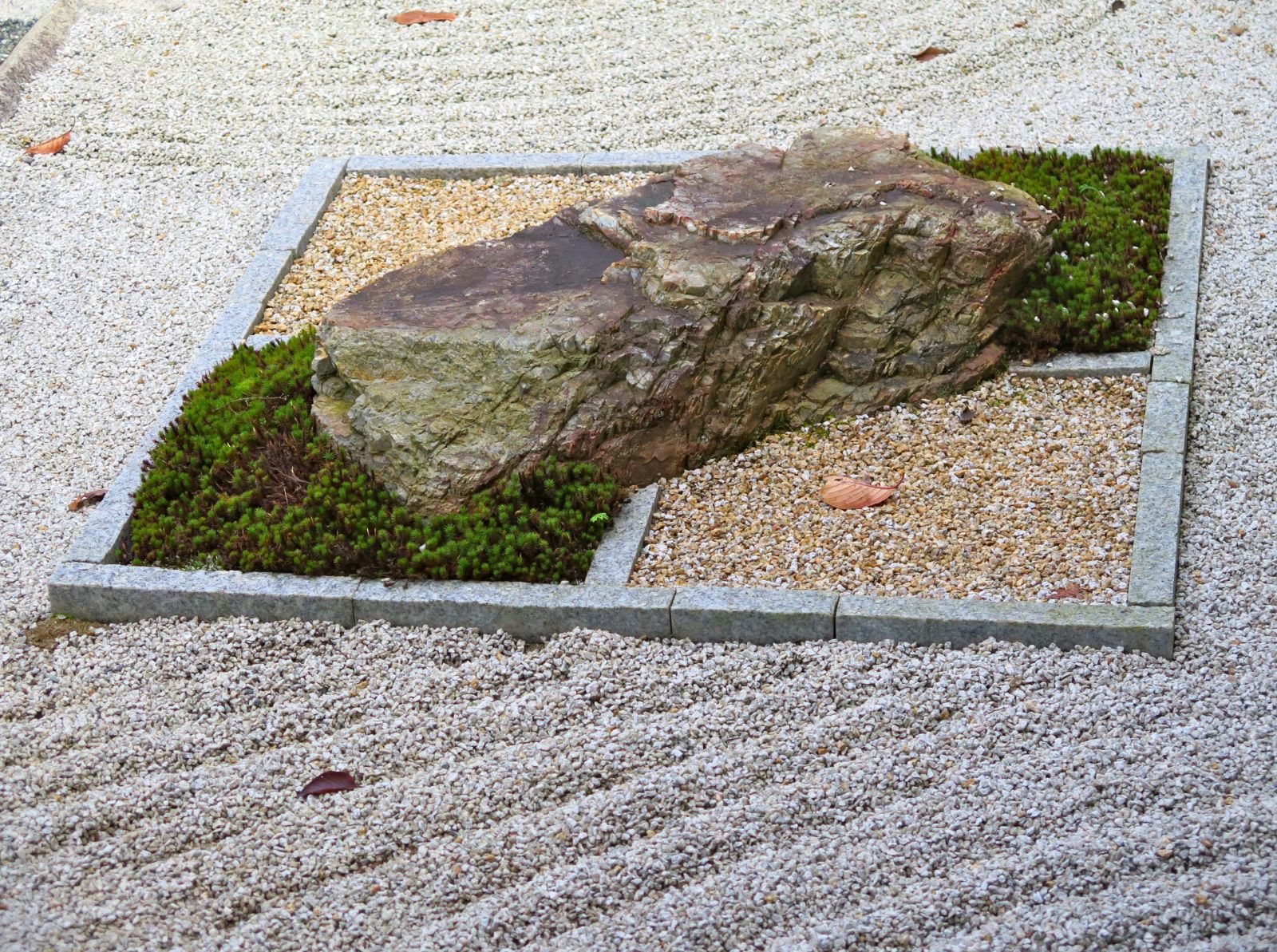 Both Chisao Shigemori and Sone Zoen are associates of ZenVita and are available to design your Japanese garden! You can view more of their gardens and read more about their work on the ZenVita Landscape Architects page. For FREE advice and consultation with Japan's top landscape designers, please get in touch.

All pictures and text by Mark Hovane. Mark Hovane from Australia is a long term resident of Kyoto and is passionate and highly knowledgable about Japanese gardens. Mark provides intimate and insightful private garden experiences in Kyoto. To learn more, visit his website: www.kyotogardenexperience.com.