Imagine your ideal home. What image appears in your mind? How big is it? What shape is the roof? What is it made of? How many rooms? No doubt, when you think of your dream house, you have a certain set of expectations and a list of essential requirements. For many of us, our idea of a house is shaped and somewhat limited by the culture we grew up in. To expand our ideas of what is possible, it makes sense to look at the houses of other cultures and compare them with our own. If we compare Japanese and American houses for example, what are our expectations? What differences and similarities will we find? What lessons can be learned?

Imagine now, a traditional Japanese house. You may have some idea of what to expect gained from pictures, and movies, or maybe from personal experience. Try to visualize how it would feel to be inside a typical Japanese room.

Most people have a general idea of how a Japanese house should look. Some will mention tatami mat floors, shoji paper screens, earthen colors and tiled roofs. Others may describe an elevated wooden porch and a Zen garden that surrounds it. That is, in a few words, the general idea we have of the traditional Japanese home, an idea gives rise to a general sense of tranquility and spirituality that resides in both the Japanese house and culture. 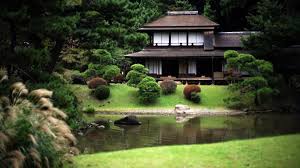 Do these images depict your idea of a Japanese house?

Now let's do the same with a Western house, a traditional American one for example. Now how does it look? What colors are dominant ? What about the materials?

This time you may see that it is trickier to form a general image. When asked, people might reply, “Where in the US?” or “What period is the building?” This is a logical response considering the size of the country, its many states, and the many cultural influences it has had over time.

The reason for this experiment was to introduce levels of cultural homogeneity and assimilation as the main differentiating factor between the two types of houses. In other words, how much Japanese and American styles have been influenced by external factors.

Japan officially opened its doors to the western world in 1854 after more than 200 years of voluntary isolation. As an island nation located in the easternmost part of East Asia, for many years Japan used the sea as a natural protective wall  to maintain its cultural homogeneity. This resulted in a strong national identity that formed the unique culture we have come to know today. Japanese houses therefore, have a long history, that reflects the people’s traditions and beliefs.

The United States on the other hand, is the exact opposite. America has been shaped and evolved by settlers from many nations, and so from the beginning has been characterized by its cultural diversity. This can easily be seen in its cities and its architecture. One looks at the architectural styles that dominated certain states and eras, like the classical revival style or the Spanish colonial style, and one sees the scale of this cultural exchange. From the famous “Painted Ladies” rowhouses of San Francisco to the modern “Prairie School” houses of Frank Lloyd Wright, the US has generated a vast variety of residential buildings. 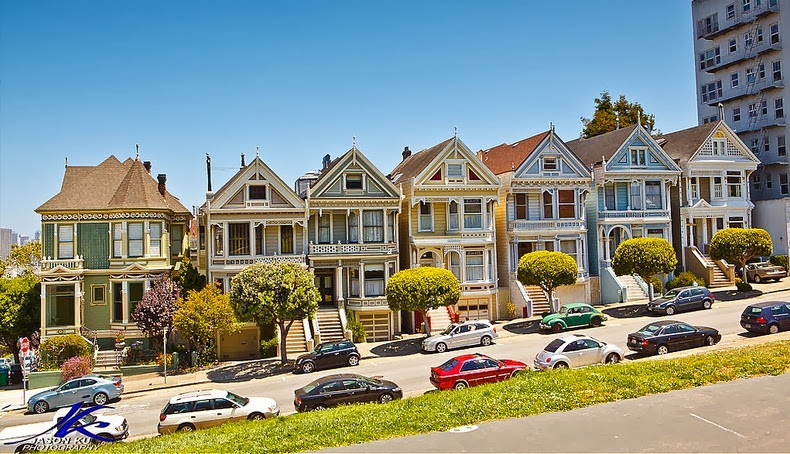 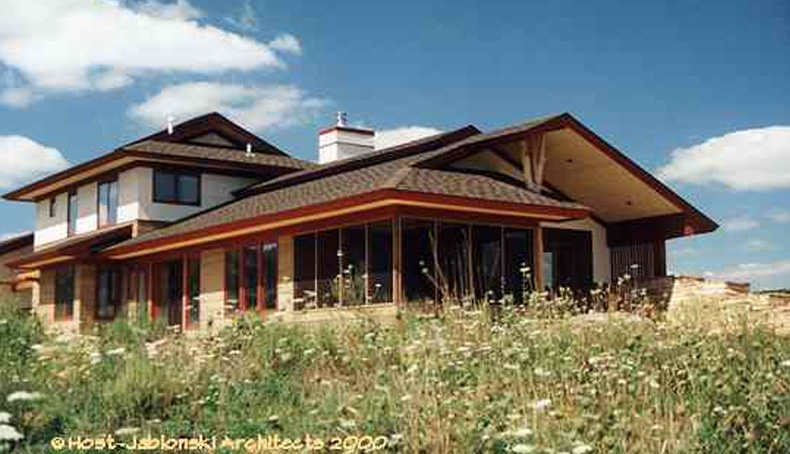 Would you say that these houses are representative American homes?

Now let me ask you another question. Do you think size matters when we want to determine a good design? Do you perhaps have an idea of the size of the average Japanese or American home?

The question of size

Research tells us that an American house is twice the size of a Japanese one (2,164 sq ft in contrast to 1,023sq ft). The drastic difference in size has to do with factors like land availability, and the habits or daily activities of the people. Japan accommodates 1/3 of the population of the US in a land 26 times smaller. That high population density calls for constraints in plot sizes, a fact that has had a big impact on residential architecture across the country.

For many Americans it would seem impossible to live in such small houses, but the Japanese, from ancient times to the present day, have gotten used to living in small spaces. Also, the traditional architecture they have developed, offers them elegant and smart space-saving solutions that can be applied even today. Small size has come to be perceived as an opportunity for innovation and inventiveness rather than as an unavoidable, burdensome obstacle. 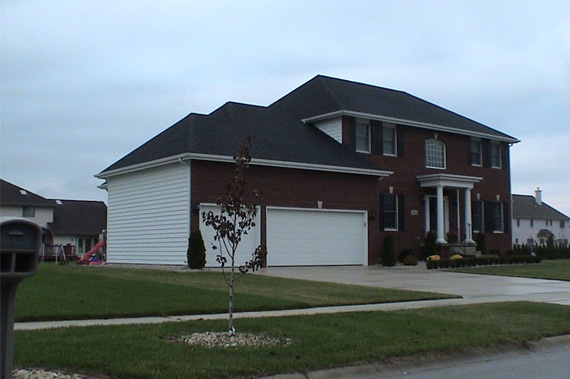 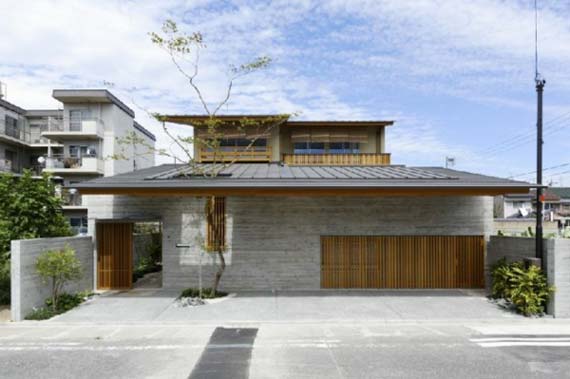 Which house would you choose from these two?

On the other hand, Americans choose big houses basically because they can afford to. Between a well-designed smaller house and a bigger poorly built one, they will in most cases opt for the big one. The image of a big house corresponds more to the American dream and in truth, there is no incentive for someone to build small in the US. Why would anyone voluntarily choose to have less when they can have more? Right?

But as you may have correctly guessed to our previous question, big size is not the key to a successful design. Creating big interior spaces does not necessarily make a house luxurious, more livable, or even more pleasant. Big houses can be troublesome, energy consuming, and if not carefully planned, quite unattractive.

Have you ever heard of McMansions? They are a new type of modern American house, oversized and mass produced that look as if they are out of scale with their neighboring normal-sized houses.

This example, of course, doesn't mean that there are no successful architectural examples of big houses in the US. As a need exists to fill bigger spaces many fine architects have risen to the challenge. 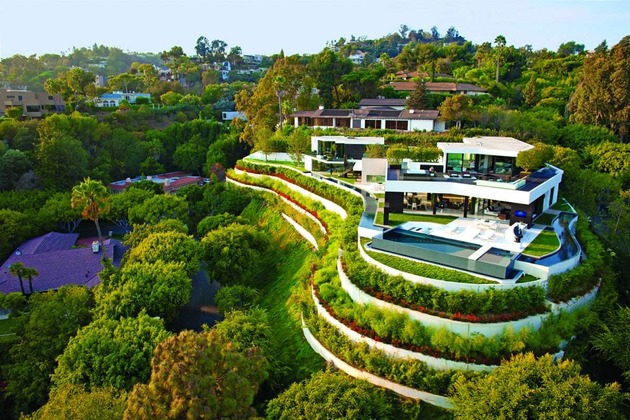 The traditional Japanese house is famous for its adaptability. During the course of one day a single room can be used as a study, a dining room, a living room or a bedroom. The use of furniture is versatile, creating alternative perceptions of that same space.

Sliding wooden doors called fusuma are used to separate the space into smaller rooms. When there is a need for a bigger space, when visitors come to the house for example, these doors can be removed and the whole place looks different.

Can you imagine having to rearrange your house after every meal, before going to bed or when you are expecting guests?

To a Westerner it may seem bothersome and absurd, but the Japanese have lived this way for centuries and even today some of them continue to prefer the most traditional houses. To them, the rearrangement of the room takes more the form of an everyday ritual than an oppressive chore. 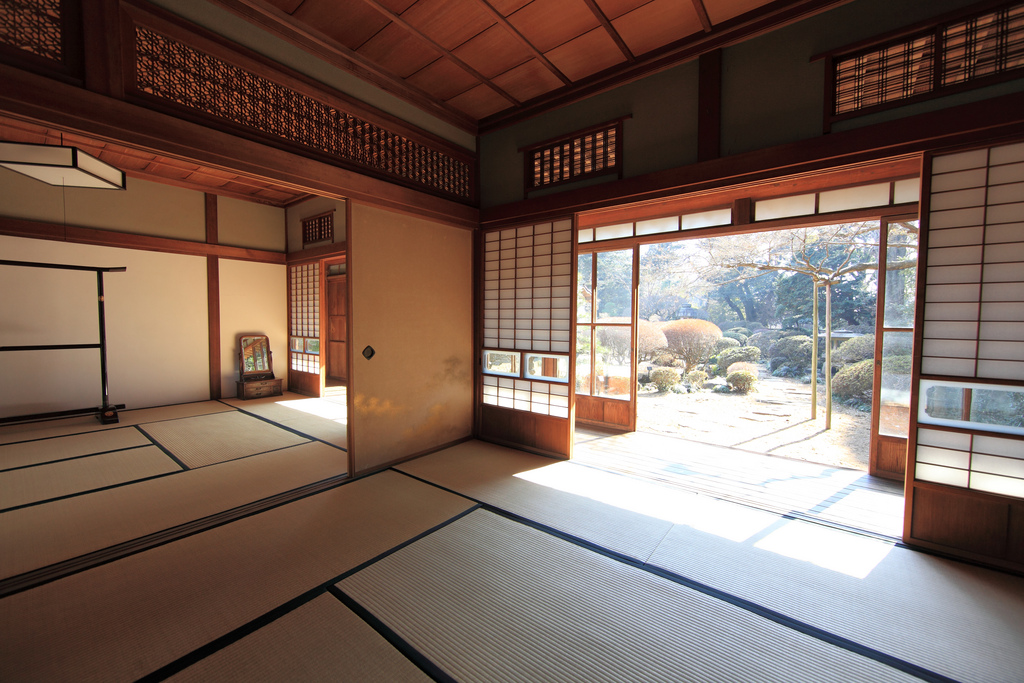 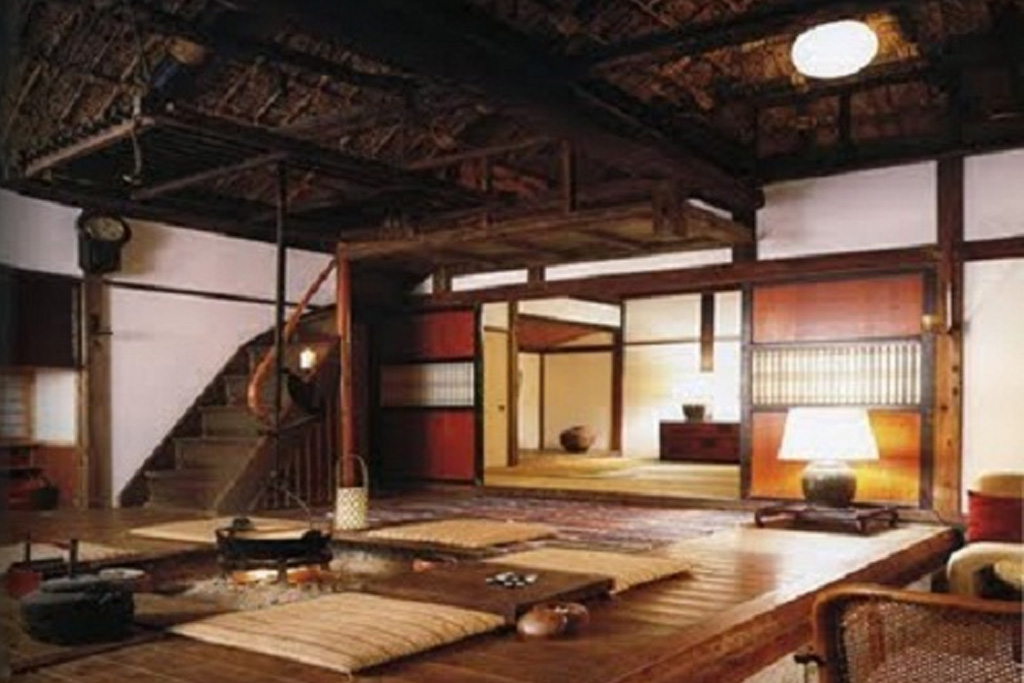 The American house, on the other hand, is clearly divided by firm walls into smaller rooms, with each designed to serve distinct functions. When functions are united, it has to do more with their coexistence in the same space than their interchangeability over time.

The most common example is a kitchen and dining room combined with a living room. In this case, we can see people cooking, eating, playing cards and watching TV, all in the same room at the same time.
When an activity finishes in one room or area of the house though, people move to the next one. The ritual here is different. 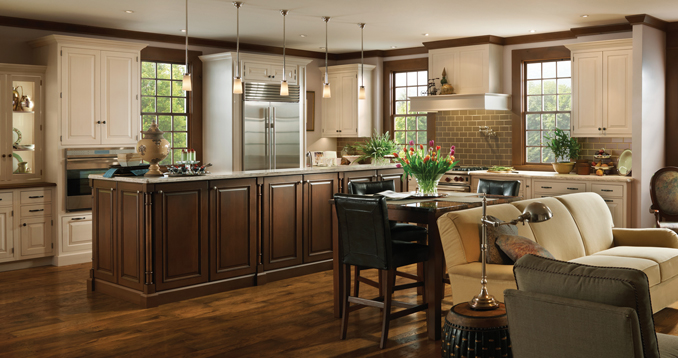 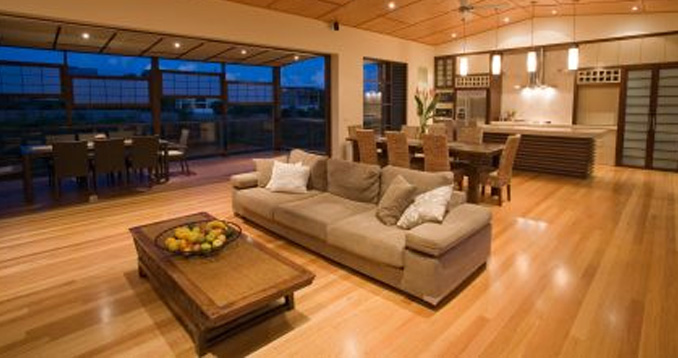 So is there a similarity between a Japanese and an American house?

The love of wood

Focusing on the materiality of the two types of houses, we see that both Japan and the US favor wood for their residential architecture.

Both, when it comes to housing, have the same notion of impermanence. Houses are built and torn down, bought and sold, so wood is preferred for its lightness and its low price. In contrast, European houses are built to last for decades and even centuries. There, children inherit and live in the houses of their grandparents, so stone, brick, and concrete dominate their housing.

Although nowadays in Japan, wood has mainly been substituted with steel and concrete, traditionally the abundance of forests made wood the most rational option.

Similarly, the first settlers that arrived in the US found rich and plentiful forests, so wood seemed like the easiest and cheapest building material. Wooden houses prevailed in the newly formed cities, and that image has been passed on from generation to generation up until today.

But if both houses are built from the same material, why do they look so different?

That is basically because of the use of different building techniques and the types of trees.

An American wooden house may not even look like it is made of wood. In many the wooden structure is covered with a thin layer of brick or other cladding material. 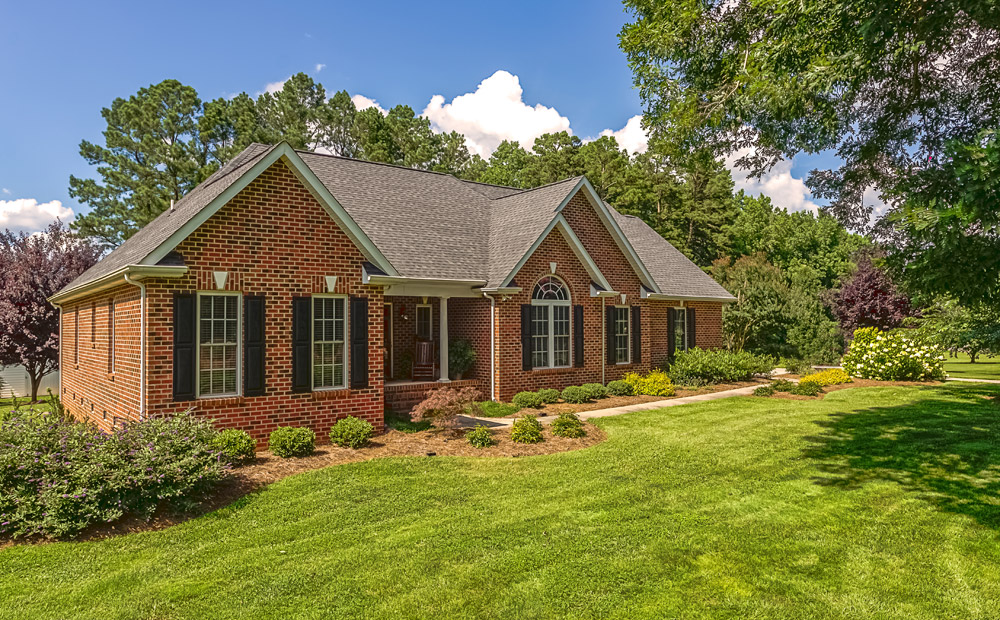 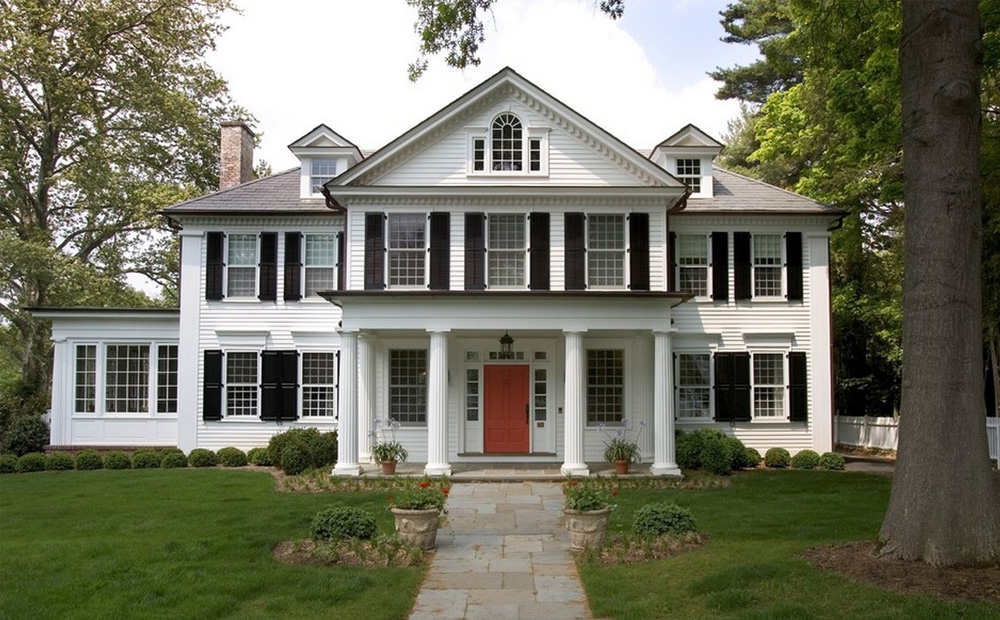 Guess what? They are both made of wood

Japan, on the other hand, is widely praised for its material sincerity. So superior is the quality of Japanese cypress, that there was never a need to hide the structural elements or to paint them. That is also a difference between Japanese and Korean or Chinese architecture, whose buildings are more colorful. 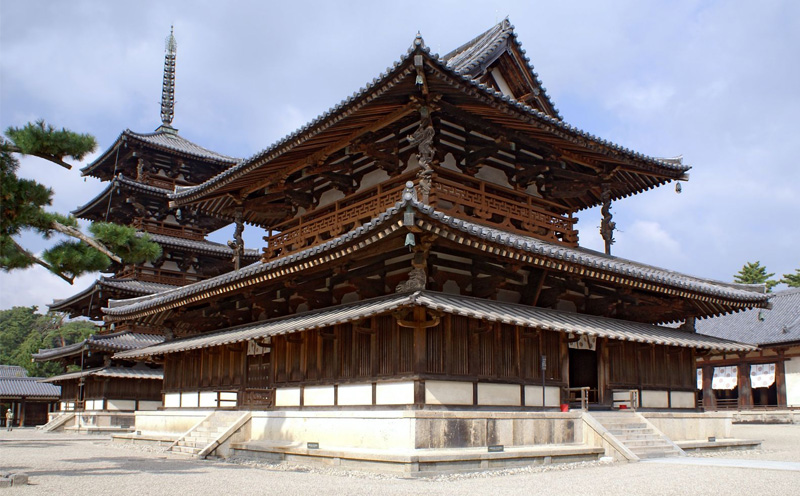 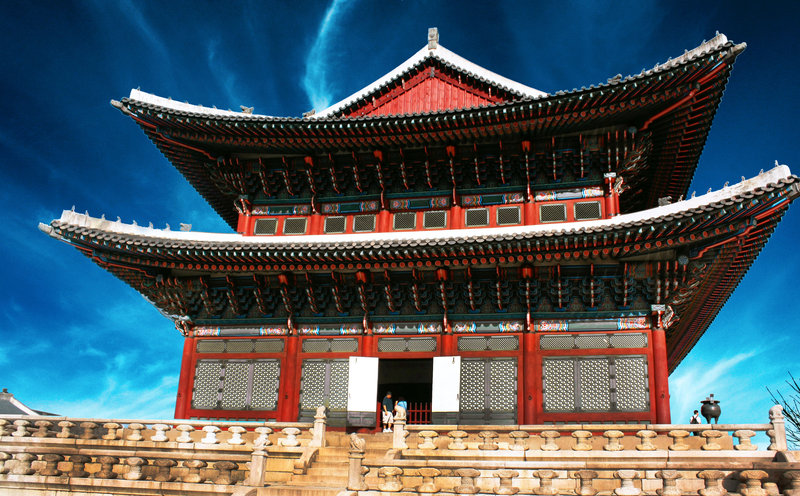 The colors of a Japanese and a Korean temple

Another important feature in traditional Japanese architecture is the use of complex joints instead of nails to join the different structural parts together. The wood is cut accurately and assembled appropriately forming an overall image of a lighter and more organic construction. Kiyomizu temple is a famous temple in Kyoto known for its elaborate wooden joints and the fact that not a single nail was used to build it. 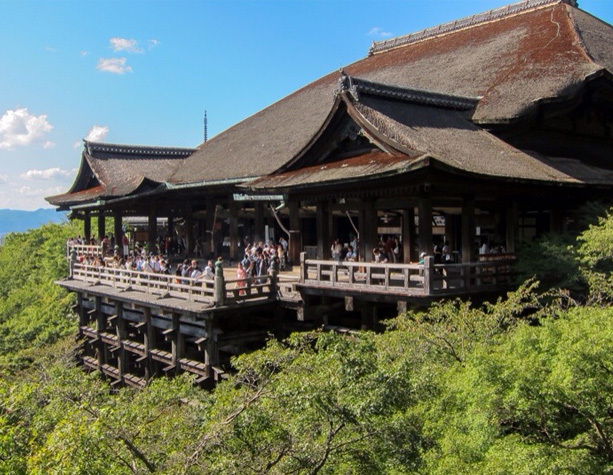 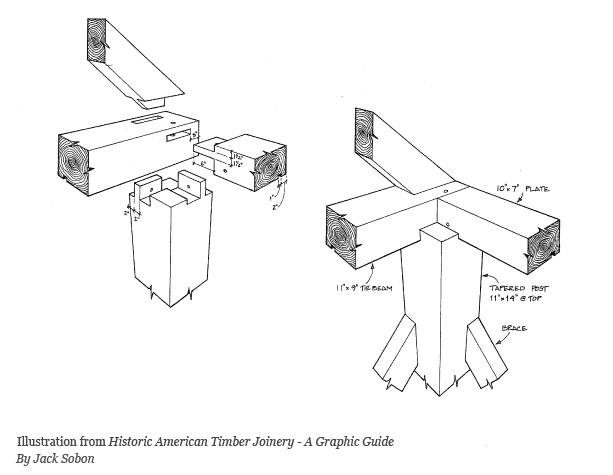 Basically, this temple is built using only fitted joints like the ones in the drawing

So what is this comparison all about?

We have seen that cultural difference, size, interior organization and materials are some factors that separate a Japanese and an American house. I am sure there are even more things that this article has omitted. But the thing is, in the end, the greatest value we get from a comparison like this is not whether and how the two types of houses are different, but the understanding of the variety of design solutions that exist in residential architecture.

Houses are built to serve their residents, to house their everyday activities, to create a warm sense of belonging. Whether you want to redecorate your room, or build your new house, whatever design you choose, it is meant to reflect your needs and your personality. 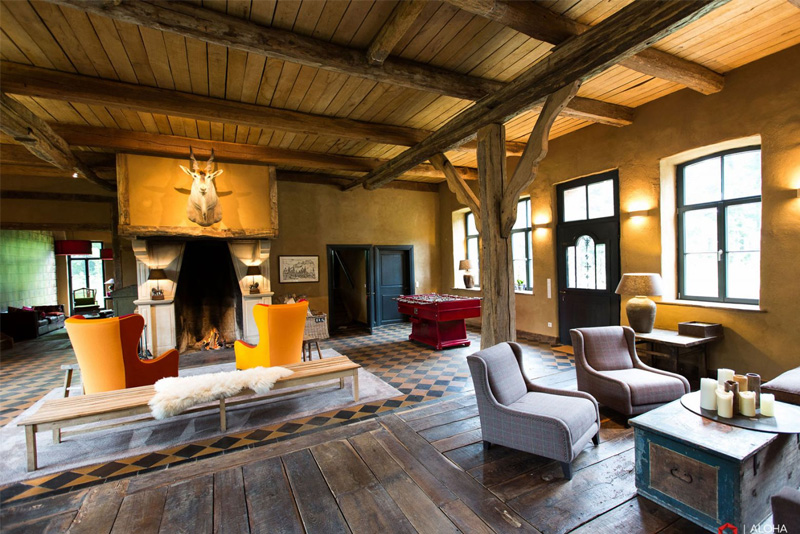 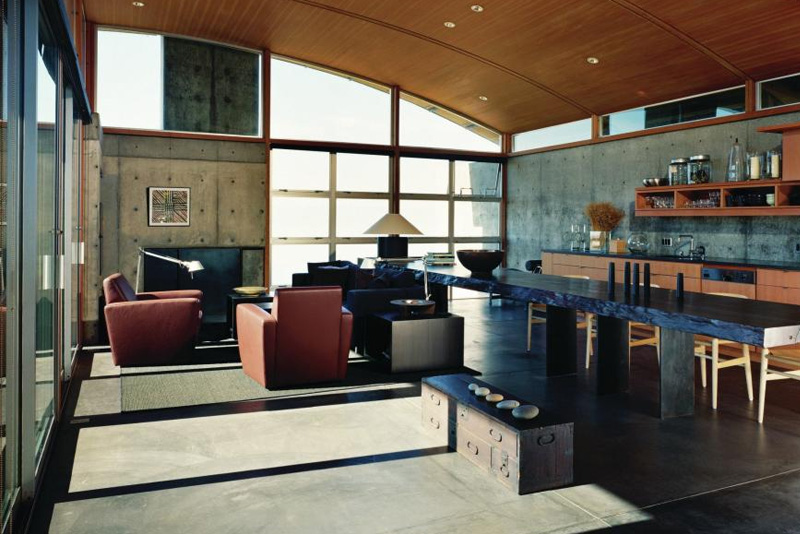 So what would you prefer? A big house or a small one? Will it have a traditional or a contemporary touch? Will it be a place for relaxation and contemplation, or will it be for family gatherings and social meetings? Or both?

The options are limitless and the final result is up to you.