Imagine yourself walking down the street, as you do every day. But today is different. Today, your eye wanders a little, and lands on a hitherto-unnoticed detail: a door in a strange place; a concrete block with no obvious purpose; an eave with no window beneath. Your world is suddenly disrupted by this lack of meaning, this refusal to conform to capitalist notions of usefulness and productivity. Thomassons have officially infiltrated your mind. 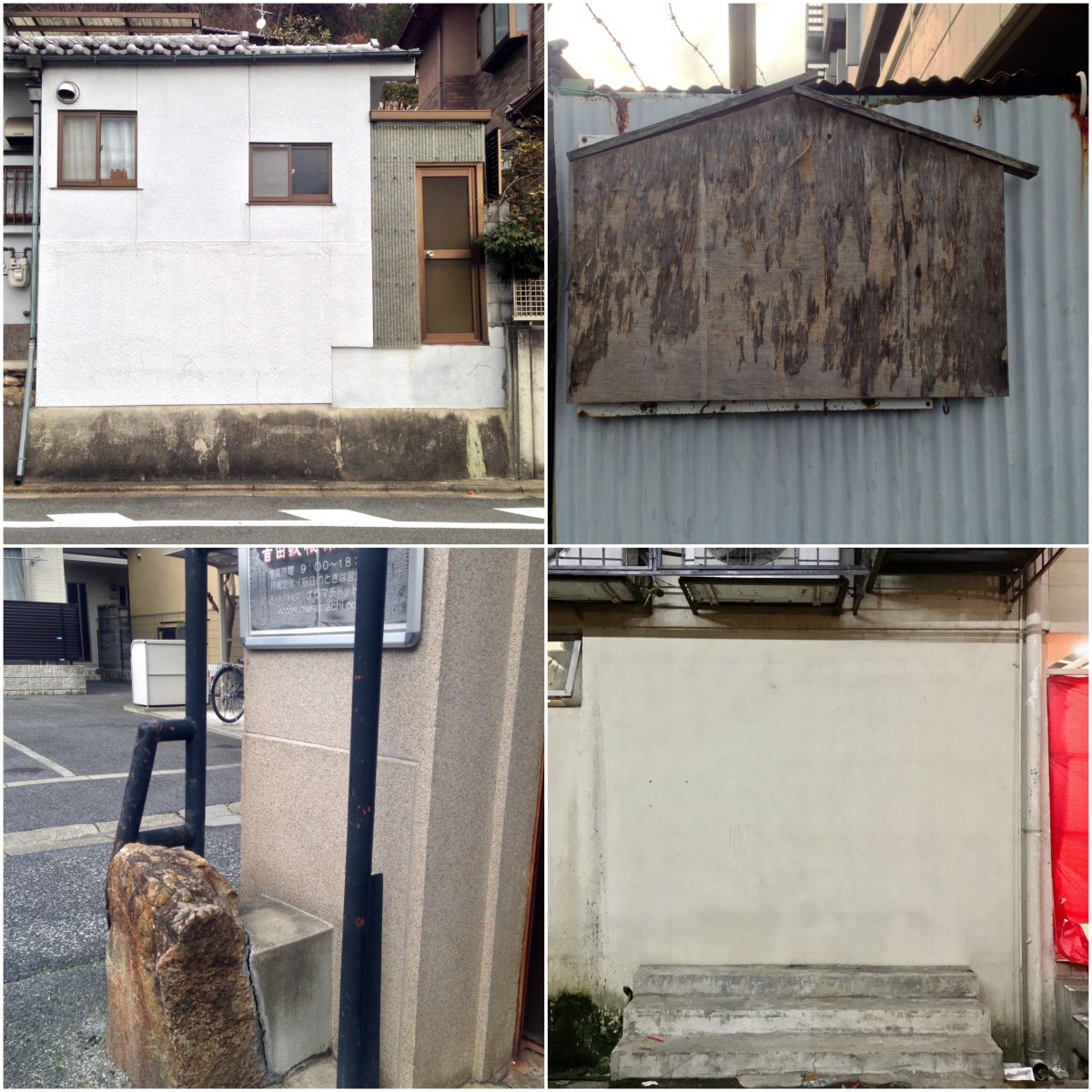 Wherefore the Thomasson? Artist Genpei Akasegawa named these objects for Gary Thomasson, a baseball player for the Yomiuri Giants during the 1970s infamous for constantly striking out. For all his inefficiencies as a contributing member of the baseball team, Thomasson continued receiving a generous salary while sitting on the bench at each game, all the way till 1982. At the same time, Akasegawa coined the term ‘hyperart’ to refer to a useless relic or structure in the built environment, objects which were more purely art-like precisely because of their lack of intentional aesthetic ambition. Hyperart Thomasson - that was his name for these architectural oddities. And so Akasegawa’s appropriation of Gary’s name became enshrined in a nationwide photography movement.

Poor Gary Thomasson. What a legacy to leave behind.

Akasegawa and his students documented and categorised various Thomassons around Tokyo.  He also serialised essays on Thomassons in the photo-magazine Shashin Jidai (Photo Times), often featuring contributions from readers nationwide. To this end, he provided the Hyperart Thomasson Report Sheet for them to fill in. The form is styled in an appropriately bureaucratic fashion, though for me it has an inexplicable hint of mockery and parody. Perhaps it is the self-consciousness. Perhaps it is the image of someone laboriously describing and documenting - on pen and paper, no less! - objects that are fundamentally frivolous and pointless. But I identify wholly with this image. As Oscar Wilde said, all art is useless. To take it one step further, all hyperart is extremely useless. All you can do is enjoy it, and keep a record of it before its inevitable disappearance down the line. Here I am 30 years from the birth of the Thomasson movement, still seeking these objects out wherever I go. 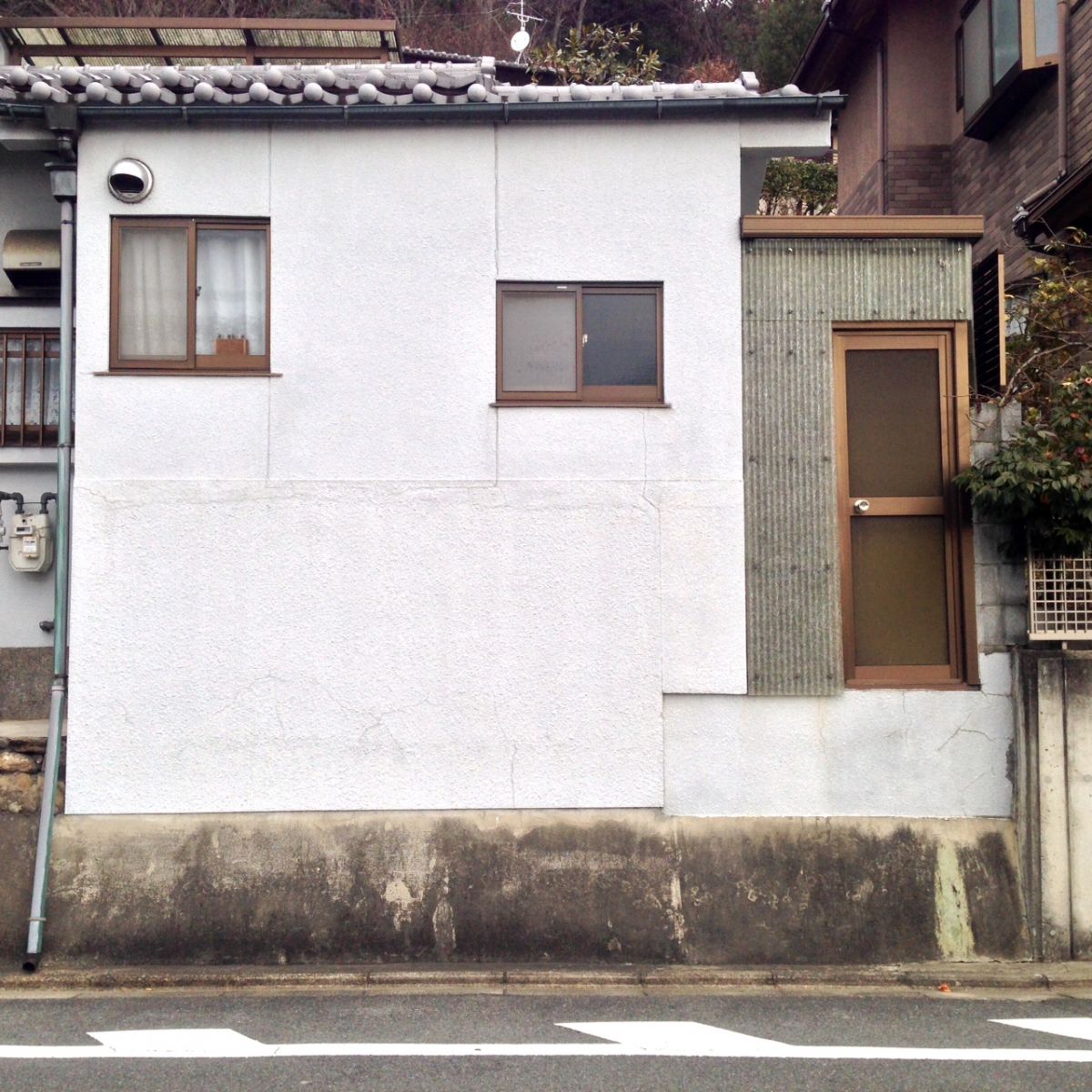 When I was 7 years old, my best friend, T, was a girl who had been raised in a Christian family. I had a vague notion of being Buddhist, though at that point in your life you are defined more by your parents’ beliefs than your own. Anyway, one day I visited her home, which happened to be a reasonably-sized bungalow in suburban Petaling Jaya. (I grew up in Malaysia.)

“Jesus turns my house into a castle at night,” she informed me with a serious look on her face.

“He just does. But only true believers can see this castle. So if you don’t believe in Jesus then you can’t see the castle.”

This photo of the oddly-placed high door in suburban Kyoto is not of the house of my childhood. It does, however, make me consider the possibilities: if T had lived here, would she have told me she could fly by stepping out of that door? Have drunken sleepwalkers broken bones from sleepy midnight sojourns? How do you deliver pizza, or as a matter of fact, anything at all? Why does it look so serene? Is this a castle and the high wall below this door an invisible moat? Does the owner of this house open the door and contemplate death? What would Jesus do? 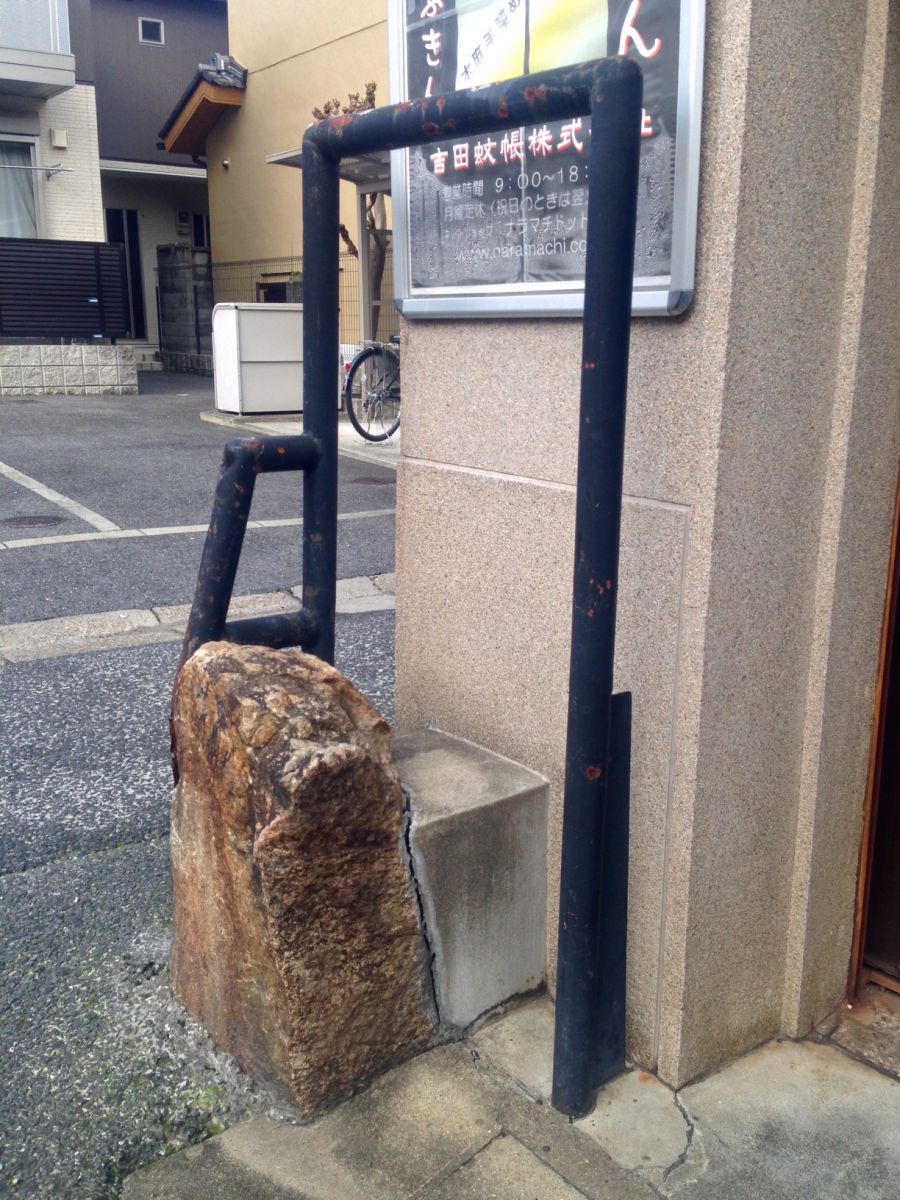 The best Thomassons defy attempts at categorisation. They will not be pinned down by labels. They sneak up on you and baffle you with the purity of their strangeness. I found this in Naramachi outside an otherwise unassuming house in the old district. What is this curious eyesore for? Your guess is as good as mine. Some suggestions:

・Umbrella rack. Compact umbrellas can be placed on the concrete protrusion.

・Bag rest while waiting outside this building 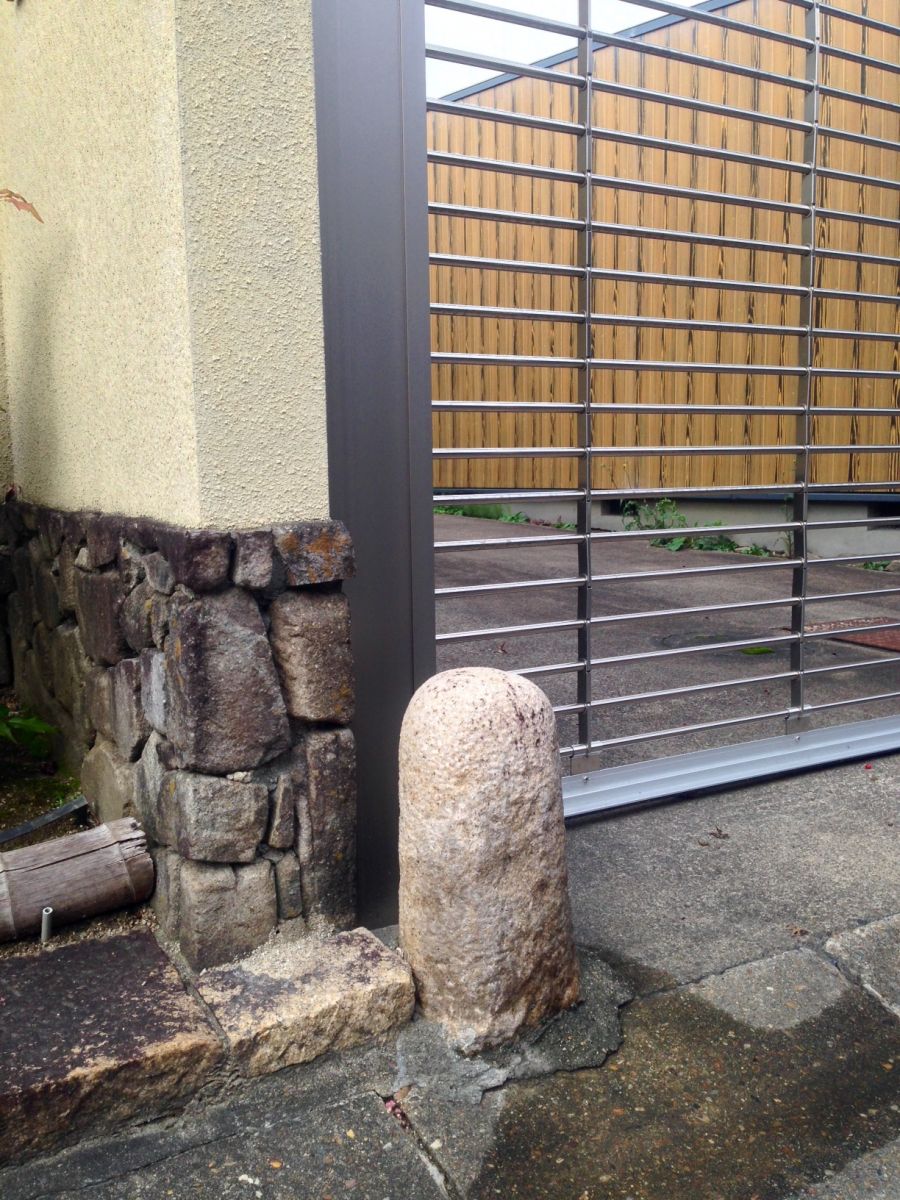 #3 If Stones Could Speak

"I used to be a statue, you know. I used to have a face until someone thought it would be a good idea to rub me for luck. Then everyone’s uncle rubbed me on the way to that temple on the hill. Tain’t no one getting lucky off this one. Bloody pilgrims! Didn’t even take half a century before I lost my nose. Now I look like a you-know-what’s-it just sprouting out of the ground. Sad and impotent, don’t ya know. Then they built this new-fangled house and forgot to move me somewhere. The least they could’ve done was given me a face again. Bastards.” 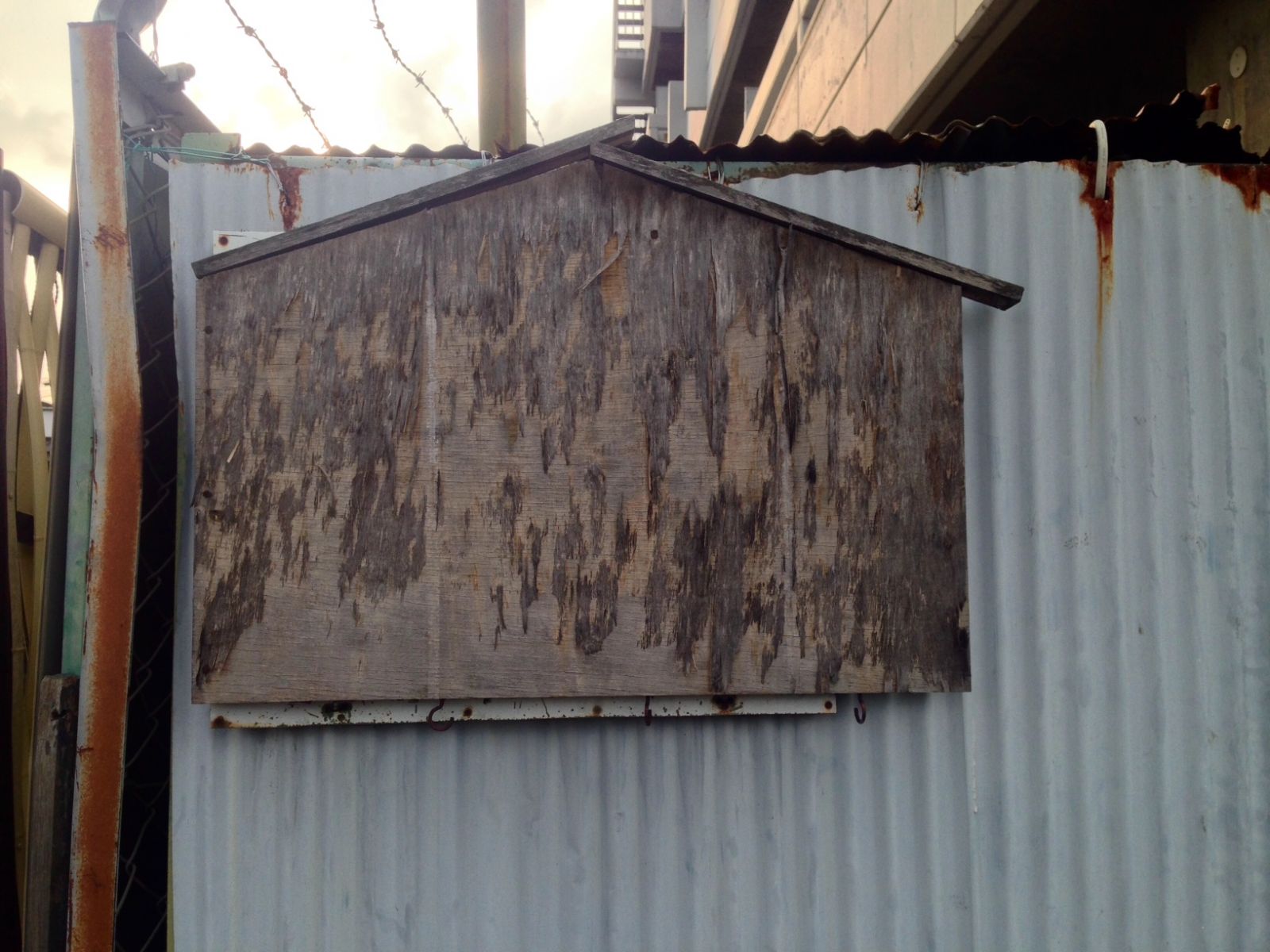 A notice board with no notices that I couldn’t help but notice. Bereft of its purpose in life, it lay there, sad and wooden and rotting in the rain. The following notices may have appeared here at some point in the last half-century. There may or may not have been liberties taken with translations. Any phone numbers provided are now sadly defunct and have been removed from all documentation.

・”Seeking housemate. Must not dislike the smell of fermenting homemade natto."

・”If you fancy a change - instead of your wife, what about the colour of your walls? Call now." 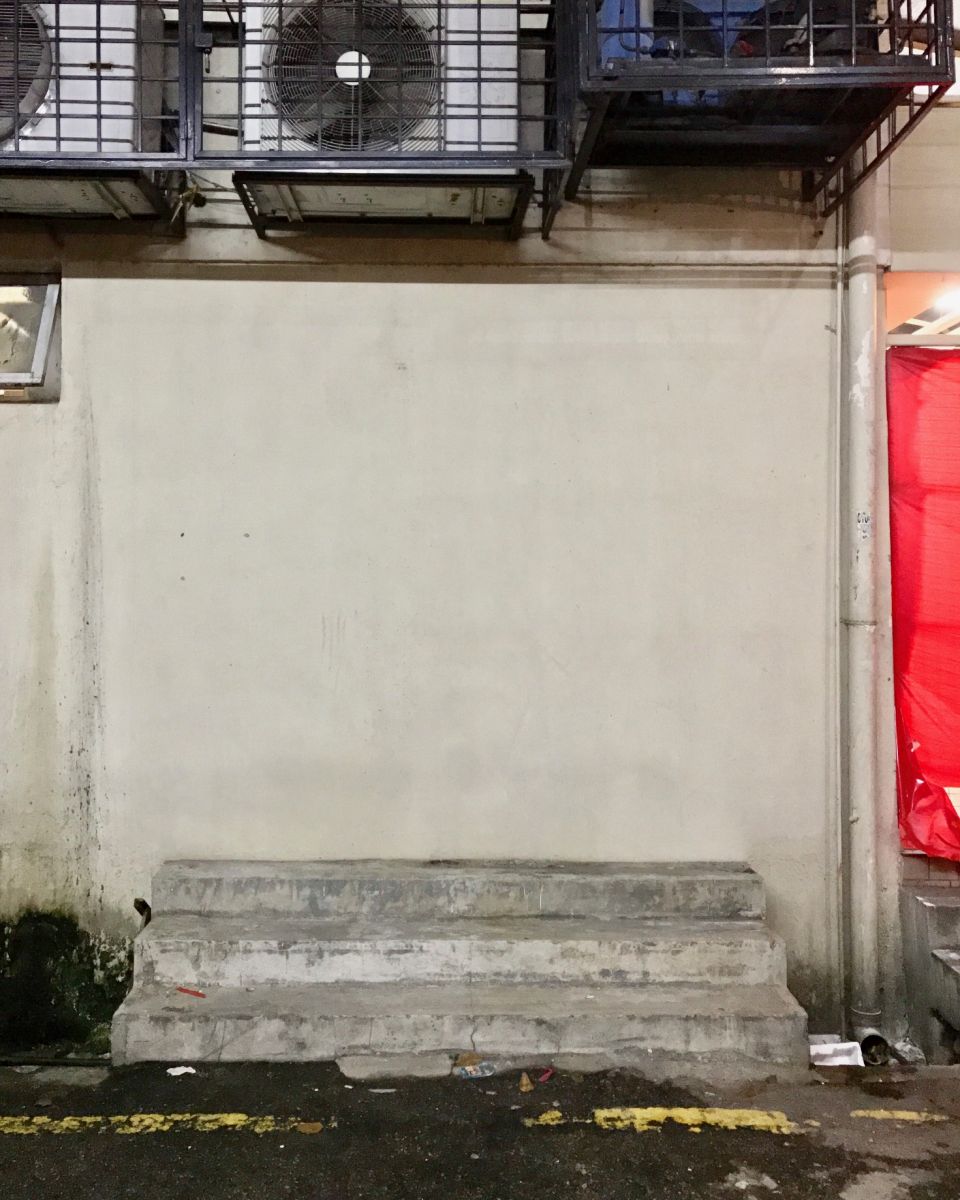 It's 2am on Christmas morning and we’ve been wandering in the neon-lit dark around the large quadrant of shophouses in SS2. Yes, dear reader - we’ve flown this Thomasson in all the way from Malaysia, just for you. There are still celebrations at this hour, cafes and roadside stalls quietly buzzing. Food is the fuel that keeps this country’s engine turning. In an otherwise grimy alleyway with rats scampering in the shadows, there it is: a three-step concrete staircase leading into a pristine white wall. A Useless Staircase, according to Akasegawa’s meticulous and totally arbitrary system of categorisation. Le stairs pour le stairs.

Ah, you think, it must have led to the back of some restaurant or something in this building. That’s the obvious answer. But now it doesn’t. Not even a sign on the wall, not even a memory of a door. Observe how unusually white the surrounding wall is, with just the steps open to the rest of the elements. The steps too are beautiful, all clean lines and a solid concrete heft. Totally functional by design and completely non-functional. Something like this reiterates my faith in the sometimes-delightful results of human error. To err is quite simply divine.

Florentyna ‘Furochan’ Leow loves peering at moss-covered rocks and is on a quest to find the best warabimochi in Japan. You can read Florentyna's previous article for ZenVita here: Doors of Kyoto: A Photography Project

For more intentionally artistic home design ideas, please visit our ZenVita Projects page! ZenVita offers FREE advice and consultation with some of Japan's top architects and landscape designers on all your interior design or garden upgrade needs. If you need help with your own home improvement project, contact us directly for personalized assistance and further information on our services: Get in touch.